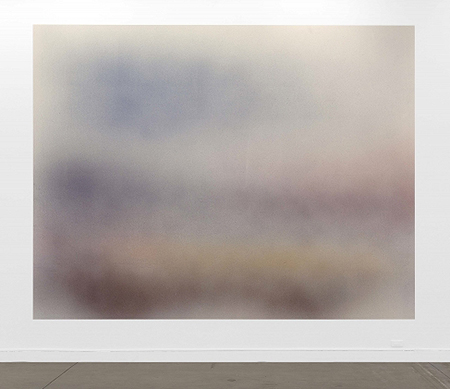 Isabelle Cornaro’s spray-gunned wall paintings stake claim to an un-mined territory that at their best are a mixture of the hypnotic and the disorienting. Titled “Reproductions,” their source is a 16mm film in which the French artist records ten small spray-painted works using a hands-on perspective. Blown up to rectangular formats ranging from a few feet to full wall size, the dense mists of paint were applied directly to the wall with perfectly taped off edges; they’re ephemerally anti-object, yet still offer both a highly visual and visceral encounter. Taking them in, especially the larger ones, vacillates from the haziness of their abstract images to the void of the white wall, an abrupt transition that tweaks the heavily embedded norm of the object-to-wall dynamic (even if only an unframed drawing).

Matt Sheridan Smith’s installation in the gallery’s Viewing Room includes a cluster of table-like pedestals crowned by silver-coated bread loaves. Though it feels like a familiar trope, it’s one rarely done with food. The loaves’ glistening, encrusted surfaces teasingly conflate oral and visual desire (and are brilliantly aided by the adjacent sun-filled frosted window) — it’s the looks-good-enough-to-eat/shiny-enough-to-covet dichotomy. The two paintings, lame transfer-based black-and-white plane patterns which don’t bear any correlation to the sculptures, are unnecessary accompaniments. But come for the bread … stay for the light.