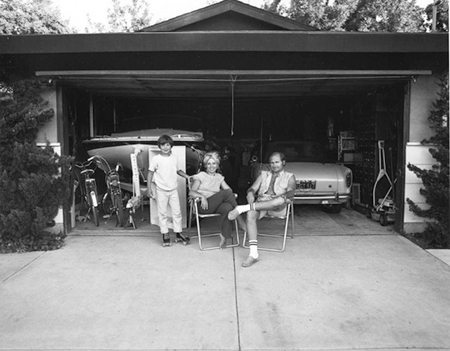 Bill Owens, "Our house is built with the living room in the back, so in the evening we sit out front of the garage and watch the traffic go by" from the series "Suburbia," 1973, gelatin-silver print, 7 x 9". Image courtesy of the artist

There is a temptation to focus on the nostalgia of pork-chop sideburns, bouffant hairdos, crushed velvet furniture, wood-paneled station wagons, tract homes and Nixon on the boob tube when viewing selections from Bill Owens’ “Surburbia,” a series of black-and-white portraits of housing tract Northern California families taken between 1968 and 1972. The series became a book of the same name that is considered a seminal publication in the area of documentary photography. But the photographs are imbued with such a rich journalistic-style eye for detail that it’s impossible to view them with that narrow a focus. Instead, there are always hints of the socio-economic, cultural and political backdrop of that moment in time.

In addition, almost every photo is accompanied by a direct quote from the subject, which serves not only as a caption but also as a window into these families’ joys, achievements and anxieties now that they have supposedly landed the American Dream. In one case, a family of three relaxes in front of their two-car garage. “Our house is built with the living room in the back, so in the evening we sit out (in) front of the garage and watch the traffic go by,” reads the caption. In another case, a mother in curlers holding a baby appears to be in distress in her new but disheveled kitchen. She says, “How can I worry about the damned dishes when there are children dying in Vietnam.”