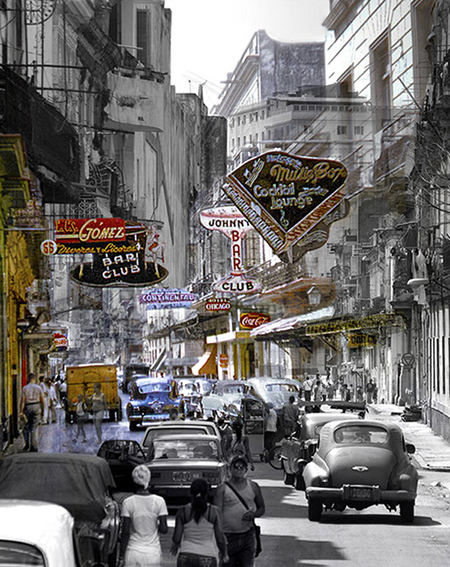 Robert Weingarten’s luminous 2003 photographs of the sea, captured religiously every morning at 6:30 am from the exact same viewpoint overlooking Malibu Bay, celebrated nature’s ability to render singular moments dramatic. With his more recent series, titled “Pentimeto,” Weingarten doubles the density and complexity of his work in an examination of photography’s connections to memory. Using a process he calls “translucent composite,” Weingarten overlays vintage photographs of historic sites with his own more colorful recent retakes of the same territory. “Pentimeto Series: London (1940-1941)” (2012) is a montage featuring ghost-like images of Londoners running from desecrations they experienced during the blitz, superimposed by Weingarten’s retake of the same area of their bustling city more than half a century later. Life goes on with few reminders of the terrors of the past.

In “Pentimento Series Da Nang (1956)" (2014) Weingarten weaves a grey column of soldiers through a sunny beach sheltered by bright red umbrellas. Evoking the memory of Martha Rosler’s determination to connect two sides of life that had been artificially disjoined in her landmark work, “Bringing the War Home,” Weinberg marches the evils of war right through an overlay of what is now a recreational haven.