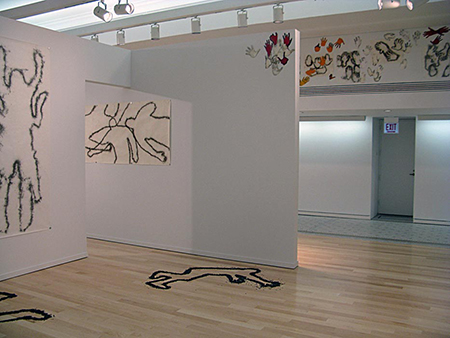 Miller & Shellabarger, the husband-and-husband artist duo of Dutes Miller and Stan Shellabarger, are known for their collaborative works that often address their lives as a couple. Mortality is one of the prominent themes in their practice, especially as it relates to the fact that one artist is destined to experience the passing of the other. In this exhibition, “AGAIN GONE,” Miller & Shellabarger continue to address mortality, though here, the works encompass another, broader read.

The walls and floors of the space display a series of works in which the artists have employed their own bodies, tracing the outlines of their figures with trails of loose black oil sunflower seeds on the wood flooring, and gunpowder that has been applied to paper and then ignited. Of the figures depicted, a few are neutrally posed, though most feature outstretched arms, legs frozen in action, as if the bodies were halted as they tumbled or fled. Aesthetically, the works immediately recall two differing references: that of ancient cave drawings, and more poignantly, the kinds of chalk outlines we associate with the scene of a homicide. On display through the warm summer months when Chicago’s gun violence skyrockets, “AGAIN GONE” is in that context suggestive of the city's most serious issue. Eschewing shock and didacticism, the works acknowledge the fragility and ephemeral nature of life with both urgency and empathy.