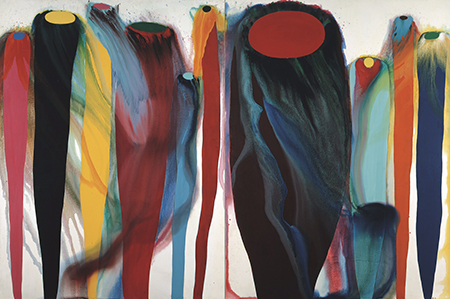 Interest in the Japanese post-war avant-garde movement known as Gutai has never been as intense given recent and current museum and gallery programming. Organized in conjunction with the Japan Foundation in Tokyo, "Between Action and the Unknown: The Art of Kazuo Shiraga and Sadamasa Motonaga" clarifies and illustrates the centrality of Gutai performative and experimental aesthetics as advanced by Jiro Yoshihara, the founder and ideologue of the movement.

Loosely translated as “embodiment,” Gutai emphasized an exploration of then radical approaches to art making. Ideas derived from Western modern art led artists in the group toward early experiments in what would later become known as Media and Performance art, Installation art, and Happenings. This show explores the careers of two artists over the course of several decades, mostly through their explosive and tactile paintings. The notion of “action” from the exhibition title is traced in the work of Shiraga (1924-2008); the notion of the “unknown” is connected to the work of Motonaga (1922-2011).

Shiraga’s mature pieces are usually executed with an emphasis on dark reds and blacks. He is famously known for discarding the brush in exchange for his feet as the implement to propel the paint. He does this while suspended above the surface in a type of endurance test between his resolve and the resistance of the material, an anticipation of Process art. Shiraga uses the physical act to delve into the primordial. Motonaga, on the other hand, uses brushes that carry paint, which drops onto the surface in order to engage in the element of chance. Here he hopes to find something as yet unseen.