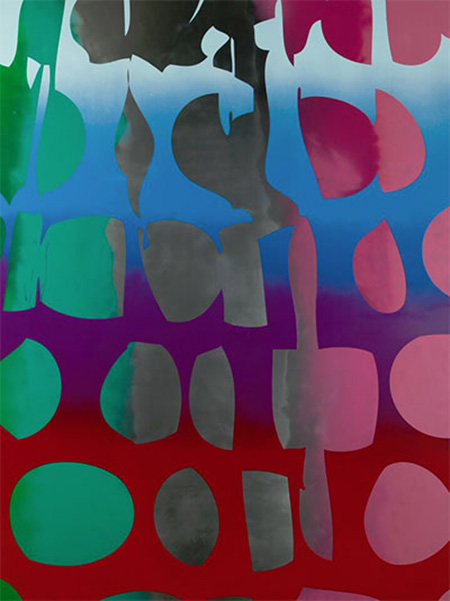 The title "Heat Check" fails to come close to describing the red-hot, large scale paintings in this exhibition of new work by Zeke Williams. The eight works, measuring from 60 x 48 inches on up, look great on the gallery walls as their abstract imagery pops and reflects a vintage, 1960’s to 90’s, graphic color range full of red, green, orange, blue, and purple. Williams trained as a painter and has worked for over ten years in graphic arts and media. In these pieces he lifts images from women’s clothing patterns taken from photographs of models, which he then scans into a computer for editing. The process unfolds into the fabrication of templates, used as stencils, for the actual painting in the studio with air propellants.

Work like this can be deceiving from afar because the distance helps the eye blend and coalesce the images. They mostly reveal the conditions of their own making as the viewer approaches and begins to see scrapes and over-paint, relics of the imperfections that arise through the process. These are what completes the work by revealing the mechanical quality of the spray and stencils; no brushes are at play here. In "Giant Dots (Bomb Pop, silver, green, pink)" Williams effortlessly captures, and reconfigures, several styles of painting from the hard edge of Minimalism, the reflection and visual kinetics of Op and the silk screen of Pop. The stenciled shapes float on the surface and occupy the varying colors laid out in vertical bands that visually counter the colors that form the depth in the piece. It creates a wonderful tension.