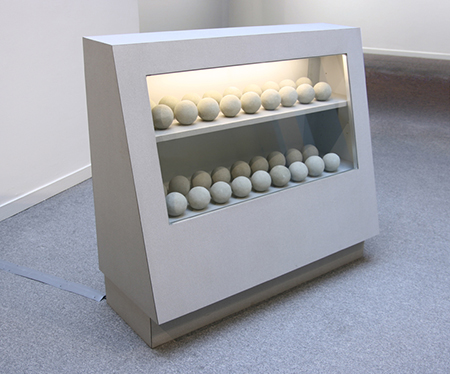 Conceptual artist David Ireland is known for making a lifestyle of art, as demonstrated in the late artist’s former home at 500 Capp Street in San Francisco’s Mission District. It is such a key venue to the emergence of the area’s conceptual art scene, the house, following years of extensive restoration, has recently opened as an artist home museum and event space. Ireland’s interest in leading an artful life extended to his using everyday materials — the more mundane the better. Dirt, cardboard, flatware, wire, and brooms feature among chosen materials.

The work also involves process; that is, the very process of making is essential to the work. Fine examples are the title pieces of the show, “Dumbballs." The objects are round balls of concrete that Ireland formed by tossing the material when wet from hand to hand until it had hardened. Also featured are collaborative pieces executed in a wide variety of materials, nicely demonstrating the breadth of his practice as well as its social component. Ireland was highly engaged with other artists, both his peers and younger artists; his home served as a gathering spot that fostered creative exchange — in addition to being a venue for displaying his work.

Including the work of conceptual contemporaries Terry Fox, Paul Kos, and Tom Marioni in this exhibition serves to give the viewer a taste of the movement as a whole, replete with process oriented works, ordinary objects, humor and a lack of preciousness. The mutual impact these artists had on each other is evident. Also included are works by artists who Ireland mentored or otherwise influenced: Gay Outlaw, John Beech and Rebecca Goldfarb. This sizable show places Ireland firmly in the center of the action, further confirming his importance both as artist and innovator.