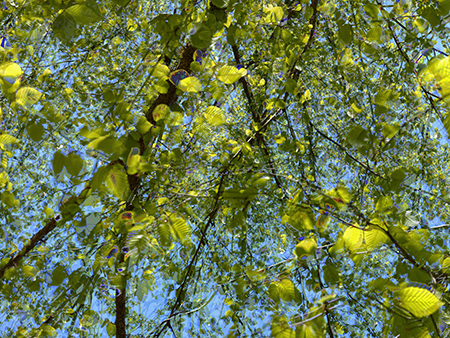 In "Raising Nature," the collaborative team MANUAL revisits nature as subject matter, something they first did in the early eighties and continued doing for over a decade. After an extended focus on photographing books, they return with dazzling images of trees. Two series comprise the show — "Yellow Birch Cycle" and "Trees Flower." The first series is eleven photographs of a lovely yellow birch’s canopy shot from below, while the other is eight photographs of flowering or fruiting branches magically floating in mid-air. Two photographs near the entrance of the gallery serve as transitional pieces, the first captures an image of the book “Tree Flowers of Forest, Park, and Streets” by botany professor Walter E. Rogers, the second “Visual Bibliography,” in which some two-dozen books are displayed on a windowsill overlooking a bright green forest. The books in the latter relate to nature and include such titles as “Man and Nature,” “Man and the Landscape,” “Trees” and “The Earth Transformed.”

The branches depicted against dramatic cloud-filled skies are from various trees, including flowering apple and Mexican plum trees, a hawthorn tree bearing red berries and a beaked hazelnut tree with yellow fruit. The yellow birch photographs are created from multiple exposures for each composite image, all taken in approximately one minute. The first four in the series were shot on various days in May, while the other seven were taken in September and October. The branch pieces are more specifically about reproduction cycles, as they flower in the spring and bear fruit later in the year. All of the intensely colored and highly detailed images reference the passage of time and the life cycle. As Shelly wrote in “Ozymandias," “Nothing besides remains. Round the decay of that colossal wreck, boundless and bare, the lone and level sands stretch far away.”