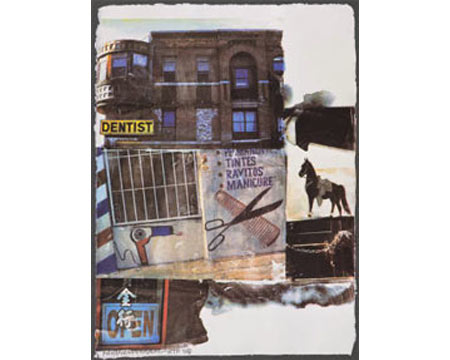 Robert Rauschenberg’s creative genius ranged over a multitude of materials and concepts, often pushing them far beyond their previously perceived parameters. This was particularly evident in his deployment of  printmaking, where he transgressed the traditional ink-on-paper boundaries of the medium to produce compositions that are often unrecognizable as conventional multiples. Most of the artist’s “prints” were created at Gemini G.E.L, the printmaking studio founded in Los Angeles in 1966 by Sidney Felsen, Stanley Grinstein, and Tamarind-trained master printer Ken Tyler. Between 1967 and 2001, Rauschenberg produced more than thirty series of multiples at Gemini; curator Jay Belloli has here selected brilliant examples from each of these series. The assembled artworks record the artist’s eager embrace of the full spectrum of material culture markers, from ornate architectural fragments to historic photographs, ghostly X-rays of the human skeleton to decorative Chinese fabrics. As such, the works can be read as a palimpsest of Rauschenberg’s voracious intellectual pursuits, from history to current events to records of the physical self. Conveyed through all of this is that Rauschenberg’s oeuvre has two potent characteristics. First, the works are evocative rather than illustrative or dully descriptive: they present elusive scatterings of poetic cues that require viewers to actively engage in the process of creating meaning. And second, each piece reveals a sustained, resonant aesthetic. They are all so damn beautiful.