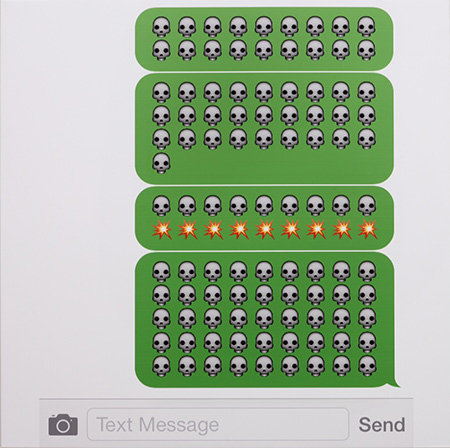 In an exciting move gallerist Frank Elbaz, based in Paris, France, recently chose Dallas as the location for a U.S.-based satellite space. The gallery jumped right into a solo exhibition of the work of Texan Mark Flood following a group show of gallery artists to inaugurate the space. Flood drew acclaim for his mid-career retrospective at the Contemporary Arts Museum Houston last spring. Here Flood mines the cultural, social, and political condition of our media saturated lives, represented with wit and irony in paintings, archival ink prints, and installations.

Paintings mounted on supports form an architectural wall structure that greets us at the entry. This format circles the gallery, forming an interior space on the other side complete with couches, a zone of privacy and meditation that counters the surrounding chaos of internet inspired images and mock logos. These artworks evoke the sensibility of street life combined with the digitized traffic of text messages and apps. It's Flood’s own version of semiotics straight from Roland Barthes. In the darkly red and black text painting "Kull Or Be Kulled," the message hits us right in the nervous system. There are several works that include row after row of his skull emojis, sporting titles like "Blue Cemetery" and "Death With Bangs.” The content of text messages is set over blue and green backgrounds. Through this repetition, combined with what used to symbolize mortality, Flood strikes at the banal and mundane that makes up, in his critique, the better part of the social media/smart phone chatter.