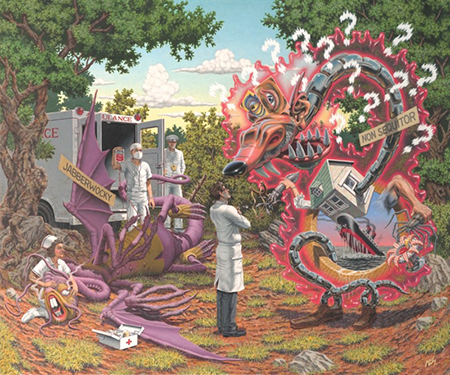 Include Robert Williams, born in Albuquerque , NM, in the moving pantheon of artists who have advanced cartoon drawing into fine art contexts, demonstrating with panache that style can still be substantive subversion. His fellow travelers in this realm include Hogarth and Daumier, who both gave caricature fine art legs; Picasso, who subscribed to American newspapers so he could track the latest comic strip distortions; and Philip Guston, who shocked and awed his collector base when he abandoned the purity of abstraction for comic strip inspired images through the dark humor of creepily cute klansmen. Peter Saul, Elizabeth Murray, Kieth Haring, and Williams' compatriots R. Crumb, and Ed “Big Daddy” Roth are also on board the same train of aesthetic thought that has so successfully elevated the wild and wooly side of cartoon crafting to blue chip status.

While art writers aptly call it Pop Surrealism, Williams, notable also for co-founding Juxtapoz Art and Culture magazine in 1994, calls it Slang Aesthetics, an outcast visual vernacular that he has spent his lifetime developing. He describes his work and method as “grown in the wilderness” and “feral,” despite his exceptional mastery of the traditional techniques of naturalistic drawing and oil painting. If Hogarth’s great satirical painting and print cycles anticipated this, Williams is a whole lot weirder and wilder, a whole lot more sci-fi-psychedelic.