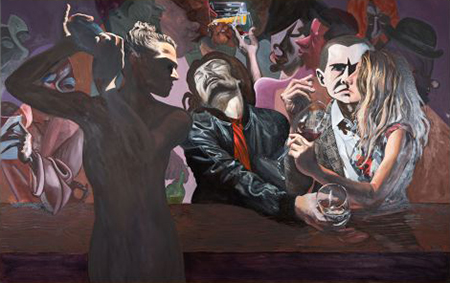 In “Secret Slob,” L.A.-based artist Justin John Greene references J.D. Salinger’s “The Catcher in the Rye.” In the classic book, the protagonist Holden Caulfield describes another character who puts on a presentable facade, though underneath he’s someone you wouldn’t want to know. In this series of paintings, Greene depicts unsavory cinematic scenarios that underlie everyday life.

In “Neighborhood Watch” Greene riffs on the caped character of the familiar grass roots crime prevention program. However, unlike that classic logo we can see his face: an aged white man peering calmly at the viewer while the urban landscape beneath him crumbles. “Bar Scene” illustrates the crowd from the vantage point of the bartender. Blurry revelers raise glasses in the background, while at the counter, a man’s head falls back onto his shoulders and another stares so fiercely at a woman that his face and hers seemingly merge.

Canvases affixed to the walls and ceiling of the gallery cut through the room, creating the feeling that we too are characters in the artist’s scenes. Greene’s style is a decidedly fictional and noir-ish, though when we allow ourselves to become a part of the action, it prompts us to contemplate what other kinds of thoughts and actions are lurking in the private lives of those around us.