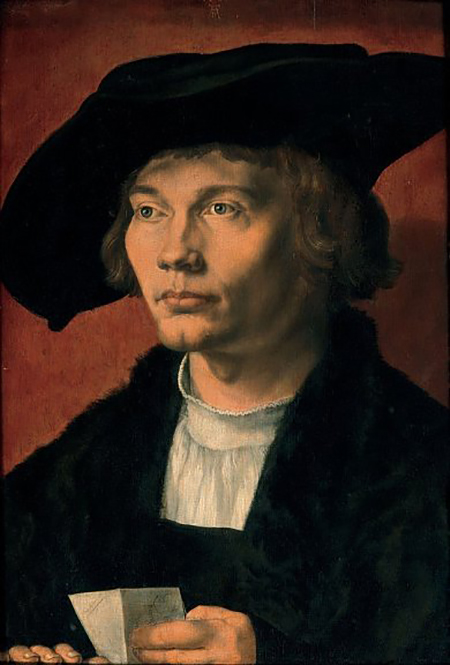 In 1517 Martin Luther posted his “Ninety-five Theses” on the church doors of Wittenberg, Germany, enumerating his disapproval of the sale of indulgence certificates by the Catholic Church. These were, at the time, believe to reduce time in purgatory for sins committed. His writings not only set off what became the Protestant Reformation, but influenced the works of many artists, most notably Albrecht Dürer and Lucas Cranach. This is the background of the exhibit "Renaissance and Reformation: German Art in the Age of Dürer and Cranach" that coincides with the 500th anniversary of Luther’s Reformation. More than one hundred objects by prominent artists of that time are set in dim light, recreating the atmosphere of that era and suggesting the Catholic church’s corruption. Divided into five major thematic sections, the show displays drawings, sculptures, copper engravings and suits of armor. In the portraiture section Cranach's “Portrait of Martin Luther" (1532) stands out, depicting the strong-chinned reformer with a small booklet in his hands. Another major attraction is Dürer’s striking “Portrait of Bernhard von Reesen” (1521), an art collector he met during his stay in Antwerp, Belgium. The sitter’s facial features and particularly his pupils are made with such precision that we gain the essence of his persona. In contrast to the portraiture section, the Propaganda and Polemics area is filled with grotesque imagery, created with the idea that it also appeals to and influences the less educated public. There are two woodcuts that stand out. One is titled “Monk’s Calf”, the other “Papal Ass” both made in 1523 by Cranach and his workshop, mocking a monk and the Pope by portraying them as monstrous creatures.