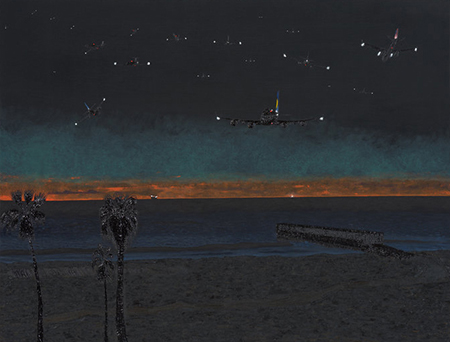 “Everything Was Beautiful, and Nothing Hurt” is a finely wrought example of Cole Case's delicate, terse style. The exhibition’s title is as poetic as the works themselves, taken from a drawing in Kurt Vonnegut’s book "Slaughterhouse 5." Working with landscapes that are primarily desolate, Case’s subjects include beaches, harbors, neighborhoods under flight paths, and seascapes that are barren except for an evocatively-placed palm, a lone freighter, towering airplanes. Eight evocative paintings are joined by a series of works on paper. Viewers see elements of realism and the surreal, a naturalistic style contrasting with a subject matter that is often hauntingly skewed. The ghost of Rousseau inhabits these works.
While there are plenty of the mysterious markers of human life — airplanes, the ship, the edge of a dock — there are few human beings. A sense of dark magic prevails, with landscape and machines acting as stand-ins for sentient life forms. “Incoming LAX Traffic” features airplanes parading toward the viewer in a kind of military formation. In “Space Shuttle Fuel Tank ET 94 in Marina Del Rey,” kayakers are tiny doll-like figures, the fuel tank both more dominant and more alive. Case has created a luminous visual haiku for the modern world, with much to consider concerning humanity's place within these quiet and empty places
Chimento Contemporary
LISTINGS