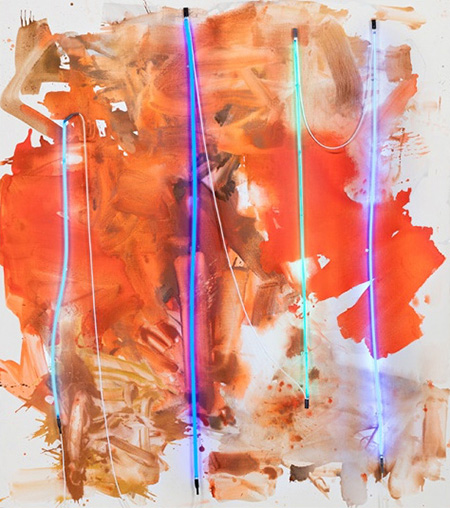 The large abstract paintings of Mary Weatherford have an affinity with the works of early color field painters like Helen Frankenthaler, Paul Jenkins and Morris Lewis. The difference however is that in all her paintings, Weatherford adds one or two colored neon tubes, transforming them into 3D sculptures. The paintings can best be described as gestural abstractions where translucent hues are layered across the surfaces. There is a jarring contrast between the crisp, illuminated lines created by the neon and the atmospheric and amorphous shapes below. Sometimes the color of the neon matches the hues in the painting as in “Daisy,” while in other works such as “Blue Cut Fire” it just the opposite. Weatherford also utilizes white neon tubes, which stand out from the white gessoed backgrounds. The cords that dangle from the tubes to their power source function as another linear element that cascades across the works. These are surprising, enticing, and ultimately satisfying works to contemplate.