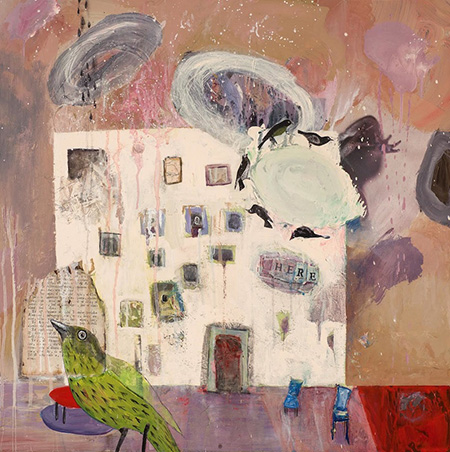 “Father, O Father, what do we here,
In this land of unbelief and fear?
The Land of Dreams is better far
Above the light of the morning star.”

This excerpt from early 19th-century English Romantic poet and artist William Blake’s “The Land of Dreams” directly influenced the title and encapsulates the aesthetic of Alexandra Eldridge’s current exhibition, “The Land of Dreams is Better Far.” Blake prioritized imagination over reality. Eldridge shares his belief that artistic inspiration should stem from vision rather than the outside world, stating that imagination is “the only real and eternal world.” She has been a devout follower of Blake’s teachings for decades, and even co-founded a commune based on his philosophies in the 1960s. Blake’s poetic ideologies to this day are a consistent presence in Eldridge’s paintings, and play a tangible role in her expression of soul experiences.

The mixed-media paintings on view do take us on an enchanting journey to this mystical place. Eldridge’s dream-like illusions never lose control over tight compositions, which are from layers of Venetian plaster that are seamlessly collaged with maps, letters and vintage photographs. As in our dreams, recurring symbols such as birds, eggs, wolves or lines of sacred geometry consistently appear. A scrawled poem or handwritten postcard may be revealed through layers of pigmented plaster, leaving us searching for a painting’s implicit narrative. But Eldridge’s myths remain as mysterious as Blake’s place “above the light of the morning star.”