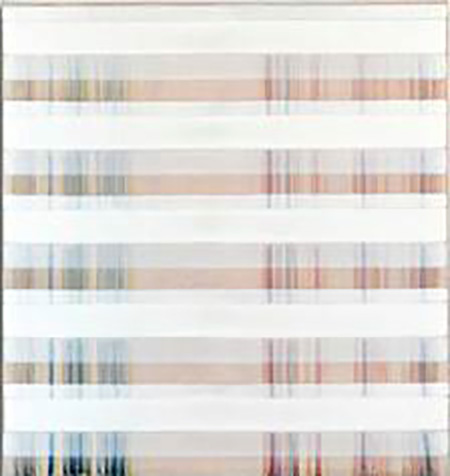 Based in Taos, New Mexico, and currently showing his collection “SEEP line,” Johnnie Winona Ross is influenced by the often imperceptible effects of nature on the landscape. The initial impression is that the paintings have little relation to the New Mexico desert Ross gathers inspiration from. The collection initially appears to draw predominantly from abstract expressionism, with a sensual, organic quality to each piece. But like the time worn path of water on rock, it eventually becomes clear how much the landscape influences the work.

Ross allows thin streams of earth-sourced mineral pigment (mostly in pale but vibrant yellows, reds, and blues) to drip naturally and vertically down the canvas. These rivulets are intersected by thick horizontal white bands, which are painstakingly layered in thin, even strokes. Rather than causing the subtractive process of erosion, Ross uses water and pigments to create a living tapestry on the canvas. Each painting takes several years to complete. Ross explains, “[t]he drips are a direct response to a particular situation I’ve been in, the landscape. Usually it’s a pre-Columbian site. It could be canyons, it could be hanging gardens, but it’s something that has affected me.” The paintings have a sculptural quality to them as well. From a frontal view they appear organic, with the linen canvas adding texture to the hundreds of layers and lines of pigment. But viewed from the side the paintings look as though they have been polished to a high sheen.