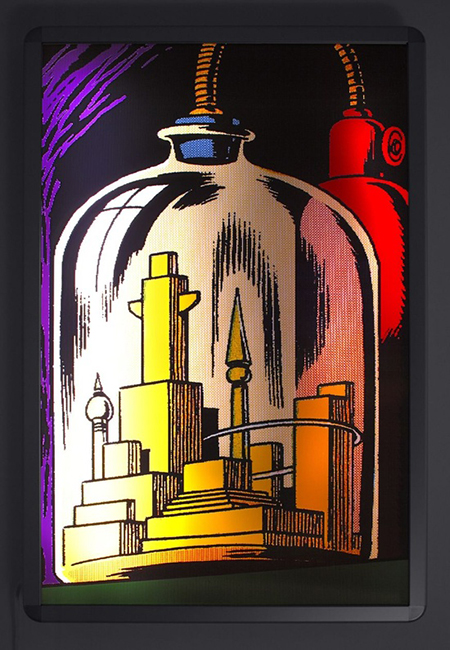 “Kandors" (1999-2011) was the late Mike Kelley’s long running, masterful multi-media-series-cum-campaign. It encompassed everything from planned utopia banners all the way to late incarnations of the artist’s grungy, subversive video performances. "Kandor-Con 2000," just one room of several that make up this museum-scale exhibition, would alone make for a substantial gallery show. Banners note that construction is “.0002 % Completed” with a “Projected Completion Date January 419500 A.D.” Another banner in "Kandor-Con" declares that it’s “Breaking Down the Walls of the Fortress of Solitude,” an apt summation of the project as a whole, one Kelley initiated in the late 1990s in response to an invitation to develop a show in Germany about the coming millennium.

Kandor was Superman’s birthplace, and Kelley used Superman comics as his primary tool of research, as counterintuitive a resource one can imagine for among the rogue-ist of blue-chip artists. The exhibition’s highlights range from the spare, pencil "Bottle Drawings," to the lenticular light boxes, to the quintessentially crowd-pleasing "Kandors Full Set," a dark-roomed installation filled with giant glass-jarred city of Kandor specimens, brightly colored acrylic and resin fabrications dramatically lit from below. These sculptures, many of them substantial in scale, represented a paradigm shift for Kelley. They moved him from a more Arte Povera aesthetic to something slicker; but the grittier and kitschier aspects that we associate with Kelley's roots continue to make their presence felt; indeed, they never left