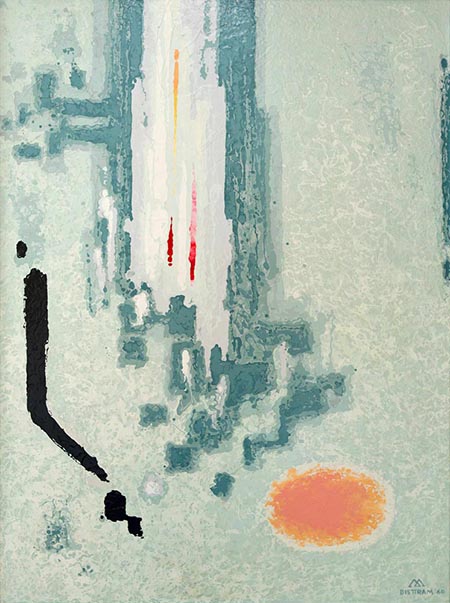 Emil Bisttram is not only a master of modernist and transcendental painting, but also a recipient of his own state holiday. New Mexico declared his birthday, April 7, Emil Bisttram Day, signifying his significant impression on the New Mexico art community. Born in Hungry in 1895, Bisttram’s first visit to Taos, New Mexico didn’t occur until 1930. Yet, by 1933 he was an active member of the Taos art community, running an art school during the summers, and participating in government mural programs in the southwest. Bisttram’s style of painting evolved significantly over the years, from geometric abstraction incorporating Dynamic Symmetry, to more representational works which show the Taos landscape’s influence on his work.

Many of these styles are represented in the current exhibition. “The Sentinels” represents some of Bisttram’s landscape-inspired paintings, and highlights his exquisite use of color and composition, while “Untitled Indian Symbols Abstraction” is a stunning example of his purely geometric forms. “White Noise,” dated 1960 and therefore one of the later pieces in the collection, is the showstopper of the exhibition. This large-scale exploration of light, color, and shape is a testament to the artist’s skill and imagination. This lovely exhibition is a deserved tribute to an artist who interpreted the New Mexico landscape through a truly unique, imaginative, and innovative lens.