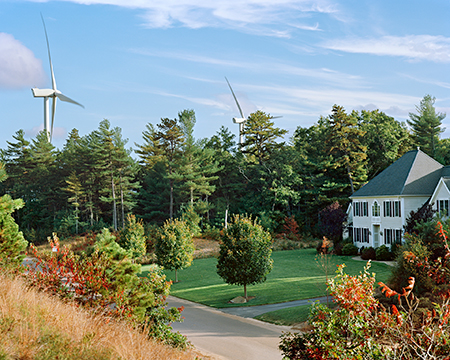 “Natural Persuasion” brings together two photographers with a penchant for documenting an unusual subject — the impact of renewable energy industries on the landscape. It’s a satisfyingly divergent show, with Jamey Stillings concentrating on solar-panel arrays in the middle of nowhere, and Greer Muldowney focusing her lens on wind turbines in the middle of urban and suburban areas.

Stillings’ work is a sampling of his four-year project, “The Evolution of Ivanpah Solar,” a solar energy plant in California’s Mojave Desert. The facility appears as a massive circle occasionally interrupted by corners and zigzags — altogether forming striking patterns in Stillings’ black-and-white aerial views. To send power to about 140,000 homes, the plant uses 347,000 mirrors, each the size of a garage door. Stillings capitalizes on the interplay of sunlight and shadows in these vast arrays, and the panels transform into glistening pinpoints on the once-pristine desert floor. One of the earliest photos is “#3995, 28 July 2011,” an aerial view of tire tracks in the dirt and grading from construction activity. Stillings concentrates on the abstract quality of the lines and curves as viewed from above. One of the most monumental prints comes from later in Ivanpah’s “evolution”: “#9499, 21 March 2013,” where the composition is jarringly divided between the arrays and an isolated black range.

Muldowney’s “Urban Turbines” (2012-16) series of documentary photographs focus on wind turbines in coastal New England cities. From seemingly ordinary scenes, the steely white turbines pop up, sending us into a double take. They appear in solo or small group configurations in the oddest locations, for instance, overlooking a shopping mall, a school soccer field or country club homes. Muldowney has an excellent eye for detail, as in “Providence Waste Water Treatment, Cranston View” (2013), where litter and peeling house paint are discernible in the foreground and a lone turbine looms in the background.

The two artists engage us with unorthodox perspectives, both in terms of composition and in eliciting opinions about the pros and cons of renewable energy when it encroaches on remote as well as urban landscapes. No matter the standpoint, “Natural Persuasion” offers highly polished, sometimes surreal, works that transcend ordinary documentation.