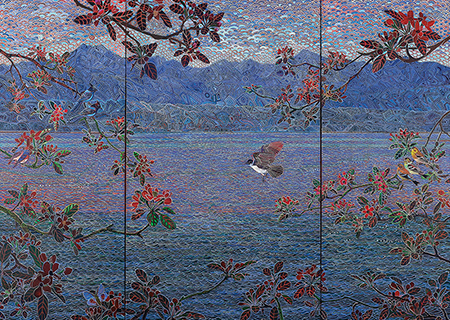 Alfredo Arreguín has been an outlier within Chicano- or Mexican-American art, a fact that  this — his fourth U.S. museum retrospective — attests. His subject matter has not been the life of la Raza or Hispanic-American communities. “Life Patterns” is partly a pun on the artist’s signature undergirding of lines added beneath and over images; it also proposes the best explanation yet of how Arrequín’s choices of what to paint have been connected to his personal life. At 83, Arreguín is the beneficiary of both the Mexican system of government art education for very young children and the American university art system, in his case, at the University of Washington where Paris-trained faculty imbued students with pristine perceptions of 20th-century modernism: color theory; formal organization; and stylized, abbreviated figures.

Having arrived in the U.S. as a young man in 1956, Arreguín served in South Korea and Japan, crucial spells that affirmed his prior affinity for flattened-out space and tight-knit pictorial organization. Meeting Hokusai first-hand, so to speak, while exploring prints in the antique shops of Tokyo, Arreguín extrapolated their examples into a dense admixture of vividly perceived landscapes, animals, real and imagined individuals, and, most tellingly, significant cultural and political-activist icons.