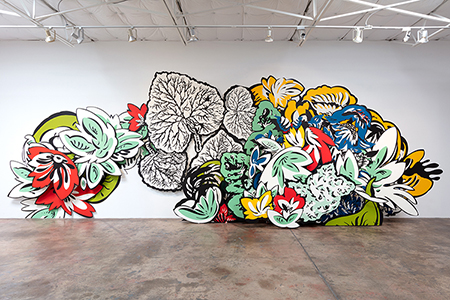 Natasha Bowdoin, "Super Natural," 2019, acrylic and ink on hand cut paper and board

Natasha Bowdoin lives and works in Houston, where some years ago she was a resident at the prestigious Core Program of the Glassell School of Art, and today serves as a professor of painting and drawing at Rice University. “Seedling” is the latest iteration of a site specific and ever expansive body of work that recently occupied the Moody Center for the Arts at Rice under the title “Sideways to the Sun.” Bowdoin creates immersive environments through the fabrication of large-scale, shaped panels depicting nature run amok with floral elements, carnivorous plants, and intertwining vines of intense color. It adds up to a dense layering of paint and collage elements full of visual incident. The images are inspired by various sources, ranging from 70’s era pattern painting, cartoons, 19th century botanical illustrations, and the early color silent films of French special effects wizard Georges Méliès.

“Seedling” contemplates our relationship to nature as an uncontrollable force that’s both beautiful and sinister. The works here bring to mind the sinister vegetation and wild landscape of the “shimmer” in “Annihilation,” a recent film by Alex Garland, where the human explorers were under the complete control of the natural environment. Conversely, they also evoke a sense of transcendental wonder, the perceptual and visual euphoria related to psychedelia. Strong reds, blues, and yellows punctuate the panels as accents to white leaves rendered with black lines representing their veins. Bowdoin argues that in the world of “Seedling” fixed relationships, borders and rigid definitions of space are as unnecessary as they are in reality.