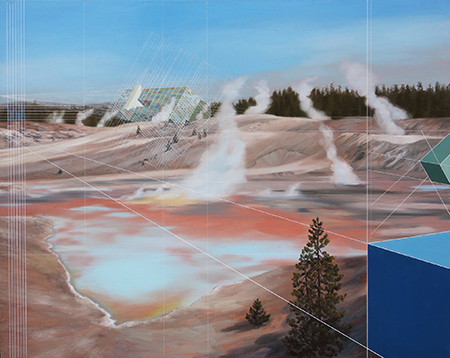 Seattle based painter Mary Iverson draws inspiration from opposing aspects of nature. Her works frequently juxtapose the stunning natural beauty of Washington and its three national parks (Olympic, Mt. Ranier and North Cascades) with the industrial ephemera of Seattle’s seaports. Iverson’s iconographic works involve a layered approach utilizing her deft sensitivity to light and natural phenomena. These recent works, specific to iconic geologic features of Yellowstone National Park, serve as a captivating display of Iverson’s sensitivity to nuance in the service of landscape painting. Like the late 19th century Romanticists, her imagery expresses a prevailing sense of peace and awe. However, these vignettes also provide an unsettling space to consider the complexities of an increasingly industrialized global society in contrast with our planet’s naturally fragile equilibrium. There is a palpable and prevalent feeling of grief or loss, as though we are helplessly watching a tragedy unfold before us, powerless to stop it.

The tranquility of her scenery is interrupted by an overlay of gridwork that is meticulously drafted into the picture. Bound by a grid of points, the two opposing elements are seamlessly woven together by an incisive network of sharp lineations that augment a series of structural designs, logistical diagrams or a possibly a network of international shipping routes. Like a band of marauders or an invasive horde, cargo ships and their containers abruptly encroach on pastoral settings, suggesting an inevitable dystopian fate for each locale. Whether or not it by intent, Iverson’s ultra-contemporary paintings establish her as an activist within her dynamic visual theater. It is easy to attach the heart and mind to the vistas and panoramas she sources, but impossible to ignore the ecological rhetoric of globalization and rampant consumerism in regards to economics and environmental preservation.