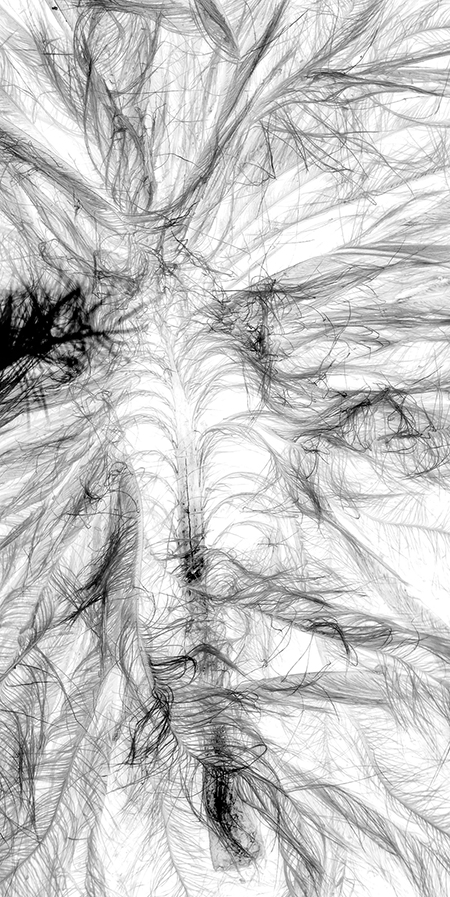 Dornith Doherty is both photographer and scientist. Her work illustrates investigations into the possible effects of climate change and focuses attention on threats to the worldwide ecosystem. In her latest series titled "Atlas of the Invisible," she continues her collaborative work with scientists, using a scanning electron microscope to examine the earth’s atmosphere and that which it contains, including birds and dust mites. In an earlier series, "Archiving Eden," Doherty focused on plant biodiversity, traveling to and photographing some of the world’s most remote seed banks. She is concerned with stewardship of the environment, so this new project also explores the effect of air pollution on migratory birds. Doherty collaborated with the Air Space, Rights, and Materiality Working Group at the University of North Texas, where she is a research professor, and the result is large-scale black-and-white prints ranging in size from 37 by 50 inches to 70 by 29 inches.

For "Atlas of the Invisible," Doherty photographed tiny bird feathers, enlarging and transforming them into exquisite graphic images that resemble highly detailed drawings. Some images are so perfectly rendered that they appear to be collages of actual feathers. Included in the show to provide scale is an actual Cedar Waxwing feather, which is smaller than a dime. “Mote” depicts the feather of a hummingbird, while “Float” is that of a great horned owl; also included are hummingbirds, mallards, falcons and sandhill cranes. And these photographs convey more than the diversity of the feathers; they also capture images of infinitesimally small dust mites. “The common view of the Earth’s atmosphere may be that it is an empty and boundless void, but in fact, it is filled with diverse particles, many so tiny they can only be perceived when they coalesce into the haze of distance,” Doherty said in her artist’s statement. “Humans are deeply entangled with this ecosystem, responsible for its increasingly mercurial character, but also profoundly affected by the air’s intensifying contamination.”

These photographs are both poetic images and documentary records. Doherty transforms the microworld into a macro view that conveys the vibrancy of life, as well as the passage of time. Included in the show is a one-minute video installation of birds in flight so ethereal that the fleeting images seem almost like ghosts of actual birds, appearing only for a split second as they pass overhead. Doherty’s work is a blend of optimism and caution, as she is always seeking to reveal the beauty of the natural world while simultaneously expressing the fragility of it all.