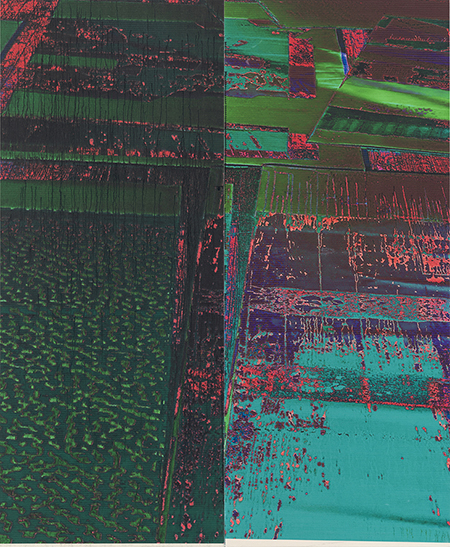 Undoing, redoing, doing … what? These questions pervade Wade Guyton's latest work created during the Covid-19 pandemic. Guyton is most often referred to as a painter, but is primarily a digital artist who makes 'paintings' on the computer that are then output on large scale Epson printers and stretched like canvases. He uses images culled from newspaper websites, as well as cropped and fragmented pictures of his own works. These are often juxtaposed with enlarged black and white textures akin to digital noise, or with brightly colored glitches atop manipulated photographs. Guyton's large canvases are graphically striking and, when seen together, they form a narrative about the formal qualities of painting — texture, color, shape, etc. — and the principals of design. Meaning is constructed from the combination of unrelated elements filtered through the glitches and accidents that happen during the process.

“The Undoing” is actually one work that consists of 26 Epson UltraChrome HDX Inkjet prints on linen that are 84 x 69 inches each. These large-scale digital paintings fill the walls and reflect the trajectory of the pandemic from March 2020 (its beginning) to the present. While most of the canvases are conceived of as diptychs or split screen montages, Guyton includes a few singular images — a photograph of a hand holding a thermometer that reads 96.8 degrees, and a sideways photograph of a computer monitor displaying an image of New Year Governor Andrew Cuomo's news conference presented by the New York Times under which is placed a small bottle of hand sanitizer. Both images are symbols of the pandemic and the precautions taken to be safe. Guyton's couplings of personal and media images emphasize the fragmentary way news is propagated, received and interpreted. The pieces are familiar, yet strangely distanced due to the degrading of the image during the printing process.

Among the newspaper webpages Guyton captures are live updates about the Coronavirus, coverage of Black Lives Matter protests, and the storming of the Capitol on January 6, 2021. The headline from the New York Times on January 6 was "Mob Incited by Trump Storms Capitol." Guyton presents a screenshot of this page that includes ads for drives and controllers at the top — as if to say, “I am appropriating the entire page.” In Guyton's reproduction, the newspaper page is divided in two, split down the center and purposely misaligned. In addition, the right half of the image is partially obscured by an overlay of black and white digital noise. On the gallery wall, it is placed in a sequence of seven canvases that hang between an image with a more opaque, darker pattern of digital noise. This is coupled with a brightly colored and manipulated picture depicting numerous folded tests of Guyton's artwork piled on the studio floor, and a canvas with an image of two square prints with blue taped edges that are also placed on the floor for viewing.

Each of the 26 canvases has a specific position and role within the sequence. Taken together they create a trajectory that weaves from interior to exterior, as well as from headline news to colorized glitches. The undoing of the title references the pandemic and how it undid life as we know it. Production, travel, creation, socializing — all these things came to a halt. While Guyton's piece is a meditation on that time, as yet a fresh memory, it is also a savvy work rooted in appropriation. Guyton's visually pleasing installation draws from many different movements in the history of art — be it Appropriation, Colorfield painting, Pop Art or Minimalism. He simultaneously embraces new technologies. The work and his process share affinities with Richard Prince's use of display, particularly his latest presentation of Instagram postings.

The use of computers and printers to make the work is very much part of Guyton’s process. The digital glitches, slippages, streaks and blobs of ink are a language that Guyton embraces and celebrates. He states in an interview in Numéro Art (January 9, 2020, by Nicholas Trembley), "The process is simple; technology is now part of our physicality ... I’m not sure how philosophical I am, but yes, there is a lot of repetition, there is a compulsion, the work consumes itself. Files close, reopen, are remade. There is something kind of beautiful about that process for me." Beauty and process are key to Guyton's work. He is unabashedly self-referential, yet also brings in mediated imagery that locates his work in a specific time and place. The 26 pieces that make up “The Undoing” encircle us, taking us on a journey through Guyton’s, and our own, dealings with the pandemic and the trials and tribulations of the last year.