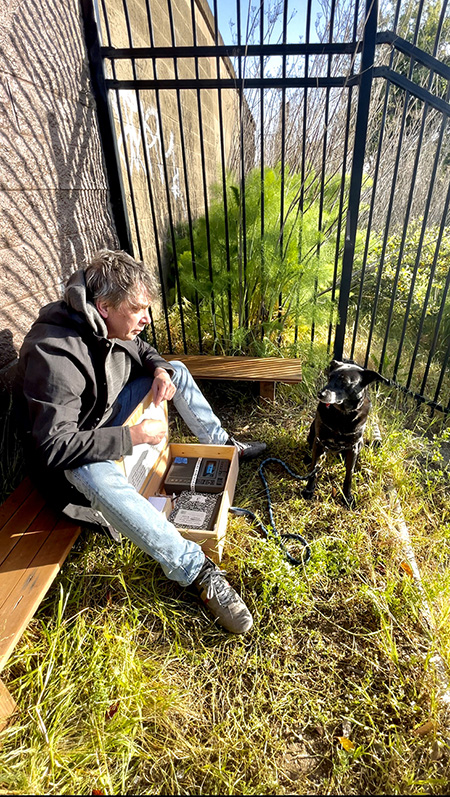 When one contemplates the concept of a landscape painting of nature, a variety of images may come to mind. Perhaps it’s Claude Monet’s dreamy plein air works of marine green rivers and lush periwinkle blue lilies; or Édouard Manet’s strangely naked lady staring at you as she sits with two male picnickers — fully dressed in brown suits — in a lush forest, in the iconic “Le Déjeuner sur l'herbe” (1862-63). Many of us are more familiar with the dreamy, psychedelic landscapes of Vincent Van Gogh, now being further immortalized in a traveling exhibition of immersive projections. Nature landscapes have evolved dramatically over the centuries to become the subject of some of the world’s most recognizable paintings.

Landscape art was not a Western invention. The earliest landscapes originated in China, with a common art form known as shan shui, using ink and a brush. Shan Shui emanates from the philosophical tradition of Taoism, i.e., that humans and animals must live in harmony with the natural world. More intriguing, the spiritual requirements of a work to be considered shan shui are extensive, but primarily based around three essential elements: the path, the threshold, and the heart. Given that landscapes involve paths carved in nature, they are never straight — the brushstrokes, lines, and compositions wind like lazy rivers, or arc like the traveling sun across the sky. The visual path in the paintings always leads to a threshold, however, and the focal point of such painting — which the other elements must lead to — is the heart.

David Wilson elevates the concept of the Chinese landscape — and the genre of landscapes, in general — to the 21st century. In an art world augmented and advanced by technology, virtual reality and immersive experiences, in “Sittings” Wilson taps into reality itself. What a concept! Through his exploration of the Capp Street Project’s David Ireland House, its archive, and the streets and neighborhood around it, “Sittings” gently compels us to steal a moment out of our lives to become immersed in a living, breathing, touching, feeling, hearing, and absolutely delightful sensing experience of the land. In a series of visual explorations, curated walks, and immersive DIY performances, Wilson succeeds in elevating what is typically a 2-dimensional viewing experience into one that shan shui landscapes aspire to: the truly spiritual.

Wilson’s paper guide to the exhibition is like a treasure map for a mysterious scavenger hunt. Several inserts offer detailed walking directions to three sites, all of which originate at the David Ireland House at 500 Capp Street. The guides’ extensive instructions — e.g., “(1) Take a left on Capp St. towards 19th St. Immediately after Alioto Park, turn left down the ramp into the parking lot” — are illustrated by Wilson’s well known whimsical, minimalist line drawings of streetscapes, buildings and architecture, all of which further guides us.

There is literally buried treasure at the end of Site 1. Tucked away in a hidden patch of foliage, plum trees, and wild grass off of 18th Street (which one can reach only by following the trail map), Wilson has installed a small wooden bench on which to sit and contemplate the expansive, stunning landscape of the western hills of San Francisco — featuring a panoramic view of the city’s Sutro Tower rising between Twin Peaks. In the guide, one also is directed to retrieve a box under a bench, which contains a cassette tape player with a sound element (a lovely guitar ballad about “home,” at the time I visited) to accompany the gorgeous view. The three different sites/walks that Wilson created offer recordings of sound and musical performances, as well as poetry readings recorded onsite, curated by Sophie Appel and Cole Solinger of Delaplane Gallery. One also is provided blank note cards, drawing implements and a resident notebook to contemplate one’s surroundings, create drawings, and leave one’s own thoughts and observations on the experience.

I’ve experienced Sites 1 and 2 so far. While Site 1 offers that unexpectedly  resplendent landscape with a soundtrack, Site 2 is tucked away in what feels like a hidden jungle. One walks off the main street up a hill and into what feels like someone’s backyard. It’s actually a narrow public sidewalk, paved with concrete flagstones and lined with raspberry vines and wild plant growth, that’s situated between several homes in the Potrero Hill neighborhood. The treasure here is a hidden perch that overlooks western San Francisco — and if you happen to arrive at the end of the day, you’ll be bathed in the azure blues and soft pinks of the city’s famous summer sunsets. A box under this hidden perch features a cassette player emanating the soulful, longing tones of a solo saxophone performed by Prasant Radhakrishnan, a saxophonist and composer of South Indian classical Carnatic music and jazz. As with Site 1, one is gifted with an unexpected, exhilarating, and truly transcendent moment in time, space and the urban landscape.

Viewers are given the option to do all three “Sittings” during the same day, as Wilson provides detailed instructions as to how to travel between all three of the sites. He has constructed these unexpected journeys to mandate the viewer to stop, sit and listen to the world rather than merely pass through it. In the course of doing so, one finds oneself surrounded by the ultimate landscape painting.

“Sittings” also features an exhibition of Wilson’s works at the David Ireland House itself. In addition to drawings installed in a tiny hallway gallery and in the skylight attic space (accessible via loft ladder), Wilson peppers his works and drawings between David Ireland’s sculptures permanently on display throughout the House, and to delightful effect. Both Wilson and Ireland are highly attuned to the rich potential of visual and conceptual puns present in landscapes and architecture. With the addition of his own installations, Wilson proves himself an able foil to Ireland’s humorous sculptural antics.

One of the most giving artists I’ve ever encountered, Wilson actually provides his phone number on the guides so that you can text him with any questions, and writes, “THANK YOU! I LOVE YOU! – David Wilson.” With such generosity at the heart of his creativity, Wilson honors the Taoist tradition in landscapes, that all of the elements lead to the heart.