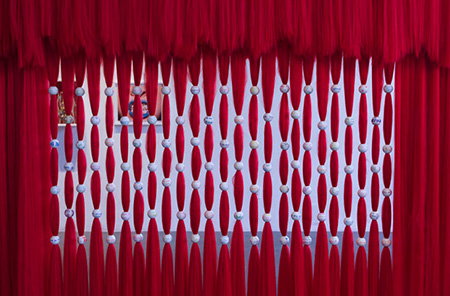 Although trained in ceramics, Chinese American artist Jennifer Ling Datchuk has expanded her mastery to include video, performance art, multimedia installations, mixed-media sculpture, and even photography. She was born in Warren, Ohio, to a Chinese mother and an Irish-Russian father and raised in Brooklyn, so exploring her identity as a woman, a feminist, and a person of color comes as no surprise. Datchuk uses materials associated with female beauty, including both real and synthetic hair, porcelain bead-necklaces, and fingernails augmented with positive female imagery.

The title of the show, “Later, Longer, Fewer,” refers to China’s controversial one-child policy implemented to restrict most families to a single child, and is illustrated by a 1970s Chinese propaganda poster at the beginning of the exhibition that depicts a housewife surrounded by vignettes of happy families. The policy has had long-ranging effects on China, not the least of which is the devaluing of daughters in favor of sons.

In “How I came to my table,” a traditional Chinese blue-and-white porcelain table is surrounded by four stools. Datchuk and her husband, Ryan Takaba (also a ceramicist), embellished the traditional Chinese flower and landscape designs with drawings of their beloved chihuahuas and other symbols of their life together. Viewers are invited to step over the blue-and-white braided synthetic hair that encircles the dining set, take a seat at the table, and share their experiences with their companions. As with many pieces in the show, the hair evokes the woman, who is essentially the “center” of the family, while the table is the center of the home and a place where family members gather. Long hair sends a message of female empowerment, but on the other hand, the video in this show, “Tame,” depicts a woman’s braids being used as a bridle to control her by repeatedly pulling her head back sharply.

The dominant piece in the show is “Thick,” a 32-foot-long curtain of floor-to-ceiling red synthetic hair that incorporates porcelain beads. Gallery visitors are asked to contribute written words of affirmation like “smile” and “love,” as well as positive symbols. Datchuk invites us to “step through the curtain into a space for healing, rest, and reflection.” “Two Week Wait” is a dazzling stairlike structure composed of gold-mirrored glass tiles and mirrored acrylic. Porcelain candlesticks are placed on the steps, and during an earlier performance were burned continuously for two weeks, symbolizing two different waiting periods — the average number of days between a woman’s ovulation and menstruation, and the more universal quarantine period for Covid. “Heavy” is a massive necklace on the floor, resembling pearls but actually made with concrete balls and porcelain beads. Datchuk chose pearls to represent status, wealth, and professionalism after hearing Michele Obama refer to pearls as a “concrete necklace” in one of her podcasts.

Datchuk is attuned to the social injustice and inequities that impede women, especially women of color. According to the artist, “My work has always been an exploration of my layered identity — as a woman, a woman of color, an ‘American,’ and as a third-culture kid.” This exploration has led Datchuk in diverse directions, both in terms of subject matter and artistic mediums, with powerful results. She effectively uses domestic objects and objects that enhance feminine beauty to focus attention on the racism and misogyny that continue to hamper women and people of color in today’s society.