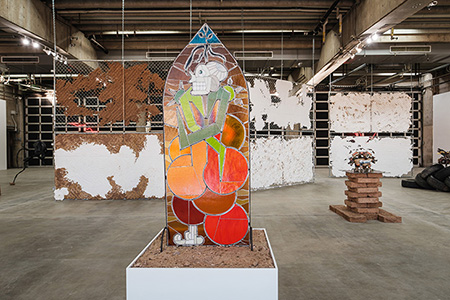 Colonizer narratives crumble amid the weight of collective mythologies, where collaborative labor has given rise to the “were-: Nenetech Forms” exhibition exploring migration, transformation, and survival within a very specific context: the Sonoran Desert. The title combines “were,” a prefix that connotes shapeshifting, with a Nahuatl term for “close together,” which is used here to suggest twinning. The group exhibition was co-organized by Los Angeles-based artists rafa esparza and Timo Fahler, along with curator-at-large Laura Copelin. They’ve also collaborated with students at the University of Arizona for a parallel exhibition at the Joseph Gross Gallery. Collectively, there is a synergy that counters prevailing systems deeply rooted in separation from community, land, and the sphere those systems have labeled the natural world.

Stepping inside a cylindrical structure built outside the museum entrance using adobe and cinder blocks, looking up towards the sky centers not only indigenous astronomy, but also the blazing sun experienced by migrants and many laborers. It’s flanked by two sun harnesses, built by Fahler, which direct light towards a trio of stained-glass pieces inside the museum, each of which sits in a layer of dirt from a different river region. The stained-glass prompts reflection on both the sun’s power and violence fueled by evangelical Christian extremism, while the three colors of dirt suggest the specificity of land in contrast to perceptions of it as homogenous and monolithic.

Rather than adapting their artworks to the existing gallery space, with its rectangular shape inspiring comparison to the big box stores that live at the heart of America’s consumerism, esparza and Fahler built eight walls of chain link, adobe, plaster, and clay. The walls interrupt the imposition of physical structure and limitations, traversing the gallery space and serving as supports for other artists’ works. As elsewhere, the artists create their own reality rather than accepting a framework built and promulgated by the institutional setting.

Works by Ana Mendieta (1948-1985), the Cuban-American artist who documented her own land-based interventions often made by pressing her naked body into the earth, are placed toward the center of the exhibition layout. A super 8 film transfer of Mendieta’s “Silueta Sangrienta” (1975) plays on a small screen near a corner of the gallery. Three neon works by Julio César Morales use line to convey the shifting nature of artificial boundaries. Chico MacMurtrie’s “Border Crossers Model I” (2017) is a maquette for a robotic sculpture suggestive of transcendence amid militarized boundaries. The work makes a compelling case for reclaiming technology as a tool for those under surveillance.

The hybridization at the heart of borderland experiences resonates in works by Karla Ekatherine Canseco and Ruben Ulises Rodriguez Montoya. Both work with an intriguing mix of materials referencing personal and cultural histories. Made with materials including clay, tires, gold, and sequins, Canseco’s ceramic pieces merge stories from ancient Mexico with those of the contemporary borderlands. Montoya’s sculptural compositions, created with organic and found objects from rabbit pelt to car fender, hang suspended over the gallery space like creatures from another dimension. Animated as they are, they amplify the intersections of identity across place and time.

These artists, as seen together here, create a compelling mythology for the present day. Each acknowledges the ecological and cultural landscapes that have shaped both their own personal and creative journeys, as well as the collective consciousness of those working towards adaptation and bi-nationality within the Sonoran Desert.