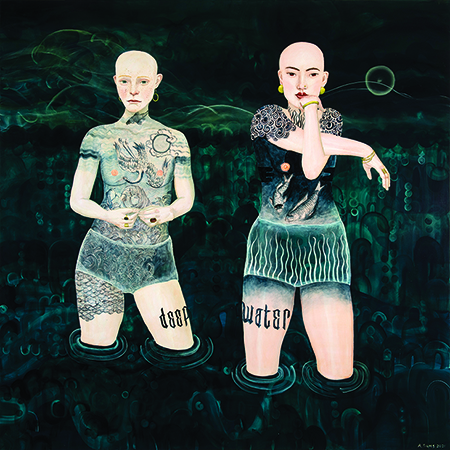 Anne Siems’ new paintings and drawings make a radical shift from her earlier work. Born in Berlin during the Cold War, before her graduate degree at the Hochschule der Künste, Berlin University of Arts, Siems won a Fulbright to the University of the South in Tennessee before settling in Seattle. Since then she has built an international career with figurative paintings which began with allusions to German medieval history, Brothers Grimm fairytales, and illuminated manuscripts.

She now builds on a series first shown last year in Portland: inscriptions in the form of tattoos on the necks, bodies, and shaved heads of teenage girls. All the romance, mystery and ecological references of the prior work have been jettisoned in favor of a kind of slick, punk centerfold-like images of girls with bland facial expressions. Celebration or critique? It’s hard to say. While tougher than the older work, it is more difficult to get a handle on the acrylics and watercolors on paper, both in terms of execution and meaning. Why tattoos? Why teenage girls? All the rich painterly texture of the old work is gone, replaced with vast stretches of empty white paper surrounding naked and clothed bodies of the sitters.

If we ignore the tattoos — based on a variety of poems the artist likes — and concentrate on their receptacles, the human body, we can appreciate the artist’s fascination with young people dressing rebelliously and insisting on deformations of skin. First, there are the girls dressed in animal clothing, like Halloween costumes at a rave or dark cellar party. “Hoodie” uses a fox pelt as a furry sweatshirt; “Raccoon Ritual” sets a raccoon head right over the sitter’s head, with striped paws and body fur covering her chest but exposing inked forearms. In “Not Tame,” gloves in the form of black birds are worn above floral tattooed legs and feet adorned with bright red mules.

The high heel shoes and scanty clothing also politely suggest that we are looking at professional sex workers, long a popular subject in 20th-century Berlin painting, dating back to the German Expressionists and their counterpart, the Neue Sacklichkeits, or New Objectivists of the 1920s. The problem is Siems is so shy with her nudity; she seems “tame” rather than “not tame” in her gentle exposés of people striving for maturity and adulthood but flaunting their youthful appeal at the same time. In these works, Siems is at her most blunt, German best, but her American prudishness holds back any real critique or sexual bravado. In a video interview for the Portland exhibition, she expressed sympathy toward women with shaved heads, e.g., chemotherapy patients, victims of alopecia (an inherited baldness), and those undergoing radiation for cancer treatment. However, none of this comes across in the paintings. They are coy and seductive at the same time.

Thus, the crudest and raunchiest tableaux come across most clearly. A woman in blue hip boots and gray panties is squatting to urinate in “Awake.” The two girls in “Deep Water” are wading with legs and heads of tattooed Japanese woodcut fish imagery and stylized waves. The girl in “Sin” is in a seated lotus position with slogans and clouds on her arms and curling snakes on her legs. The sizzling red background brings a release of emotion and context to the assertive, hostile image.

While the big (four by four feet square) panels border on soft-core pornography, the single-head watercolors are delicate and elegant. Some drop the tattoos so that our eye is drawn to the sitter’s psychological expression instead of the peculiarity of confusing texts. Why an artist with such gifts of complicated narrative imagery has resorted to Gothic-type poetry excerpts and tag lines instead of backgrounds or fairytales (many of which had their own horrific dimensions) remains unclear to me. An artist has to grow, to be sure, but Siems is exposing a weakness rather than strength here: she is divided between celebrating individuality (“Inner Wild”) and the more evident adolescent conformity. Her complex pictorial structures once had puzzling but satisfying subjects; now they are still puzzling, but off-putting.

After several decades of painting, and an extensive international resumé of gallery and museum shows, Siems deserves a broader examination of her entire oeuvre. Such an undertaking could make more sense out of the paths that led to these tattooed teenagers; paths that are not entirely attributable to “four years of Donald Trump” as the artist claims in the Portland interview. Of all her examples of shaved heads, not one depicts a Holocaust victim or French “horizontal” collaborator. Maybe that is where she should have begun this particularly intriguing, but wayward, path.