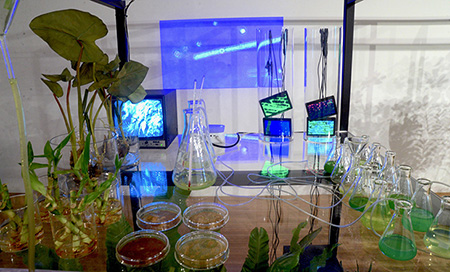 A researcher in the physics department at UCLA, Lothar Schmitz has for years been merging science and art in room-size installations that are aesthetically pristine, thereby bringing visual appeal to subjects that many of us might otherwise find intimidating. In works from the 1990s, he translated aspects of the human circulatory system into an exquisite structure of glass containers and plastic tubing filled with red and yellow liquids that refer to body fluids. More recently, he has focused on the natural environment, examining the processes and dynamics of plant metabolism from both micro- and macroscopic perspectives. For his new installation “Artificia,” Schmitz transforms the gallery space into a kind of discovery museum, where real plants commingle with artificial ones, and freestanding boulders that look deceptively true to life are entirely fabricated. He also unites nature and technology through the use of several video monitors and projections in a variety of formats and scales.

At the core of Schmitz’s installation is a display case where he conducts a real time experiment intended to shed light on how plants communicate internally and with each other. On the floor of the left section sit four potted plants with small electrodes on their leaves that send signals through the liquid parts of each plant to measure how molecules transmit electrical impulses. Live and recorded microscopic views of these occurrences appear on three adjacent stacked video monitors.

Above this are two glass shelves, one of which holds two plants in glass containers, four Petri dishes with bacteria cultures, several flasks filled with green liquids that show the progression of algae growth, four small videos of microorganisms suspended in liquids, and another video showing a sequence that moves from micro- to macroscopic views of foliage taken from rainforests. On the top shelf is an arrangement of additional flasks with green liquid and a video showing micro/macro images of moss from Icelandic lava fields, which in the real world could not exist in the same environment as the rainforest foliage seen in the video below. Behind all this is a wall projection featuring microorganisms that live in water and supply oxygen. The rest of the display case, which is floored with artificial turf, contains a fabricated rock with patches of preserved dead moss and a small dome that protects a grouping of miniature fake trees. Next to this is a life-size jam-packed terrarium of artificial plants with more preserved moss.

The surrounding areas of the gallery house a simulated outdoor environment of artificial plants and rocks, with a corner displaying video footage of microorganisms on flat monitors. The former challenges us to distinguish between what is real and what is imitated, while the latter is spectacular to view simply because of its uplifting psychedelic properties. Likewise, even as the overall installation invites us to ponder relationships between nature and human intervention with it, there is a joy to be elicited in viewing the details in the display case, which are alluring in form and feel magical.

Nicely complementing “Artificia” is Ephraim Puusemp’s “Nebulous,” a grouping of three photographic prints of galaxies and nebulae that, like Schmitz’s rocks, are not exactly what they appear to be. While they seem photographic from a distance, viewing them at close range reveals that the imagery is comprised of thousands of tiny black and white dots, such that they resemble the abstract paintings of Gordon Onslow Ford more than the drawings of starlit skies by Vija Celmins. Additionally, there is greater contrast than one might expect to find in a photograph of outer space. So what gives? Are they drawings or photographs? The answer, in fact, is that they are a little bit of both. Seeking to employ an “interpretive human process” to create a convincing photographic representation, Puusemp began by making dotted drawings in negative of images taken by the Hubble Space Telescope. He then photographed the drawings and used the resultant negatives to create the final set of photos. This elaborate process of translating a photographic image into a drawing and then converting it back into a photograph produces a velvety surface effect that makes his galactic imagery particularly sumptuous to behold.