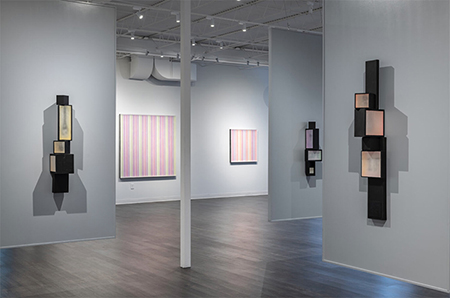 For “Vanishing Vibrations” McKay Otto compliments his ethereal gridded paintings with a grouping of black assemblage sculptures taking the form of mysterious, self-illuminating light boxes. All but one is wall-mounted and their titles contain the word “ever,” which reflects Otto’s essential question, “Do we ever reach the unreachable ever…?” The word “ever” is derived from an old English word that means “of unknown origin.” It can also connote “at any time” and “at all times.” Everland is also the name of Otto’s retreat, an expansive country home and studio in the Texas Hill Country.

In the words of the artist, “My work sets the stage for asking, do we ever reach the unreachable ever. In consideration of the dimensional relationships that exist between painting and sculpture, my work is obsessed with the expression of color, light, and the way we perceive these things.” Otto’s work is all about light, and he uses it to create magic. His process is highly secretive, but he will reveal a few details. Starting with a wooden box that may be large or small, shallow or deep, he paints it with various colors and then stretches a synthetic transparent nylon over it. The transparent “canvas” is then coated with luminous paints that both absorb and reflect light.

In the new series of black boxes, Otto places objects or words inside the box that are partially obscured by the nylon. Words such as IF, WHAT, and ART, along with mysterious objects, shimmer in the depths. We are drawn to quietly contemplating and moving around these objects so as to absorb the subtle interaction of materials and how they shift as the light changes. Any discussion with Otto eventually leads to his mentor, Agnes Martin, who told him years ago that he has always been trying “to make the material world go away.”

In his earliest assemblages he stretched panty hose over found objects. The paintings in this show are similar to the work he has been doing the last few years, but the sculptures are a departure in terms of connecting his earliest work with his present investigations. The black boxes were all hand-picked from thrift stores and then painted with matte-black paint. The objects within reference the found objects in his earlier assemblage work. According to Otto, Martin said that she was stuck on a two-dimensional plane and predicted that he would go beyond that due to his abilities to combine sculpture and painting. Otto puts it, “As the rigidity of the planar support becomes dissolved, the circumstance arises to create works that are inwardly divisible and outwardly expanding.”

This work exists somewhere between the material and the immaterial. In the same way that light streaming through a stained-glass window in a cathedral becomes ethereal, the light captured in and reflected from these pieces has its own spiritual quality and becomes multidimensional. Ethereal light can’t be painted; it’s pure, and it must be created in other ways. Otto’s artistic path has always been moving toward the light. As he says, “I’ve created a bridge and a vehicle between this world and the world of the sublime.” Otto may never reach the unreachable, but his work is continually about the journey rather than the destination. Each new iteration draws us closer.