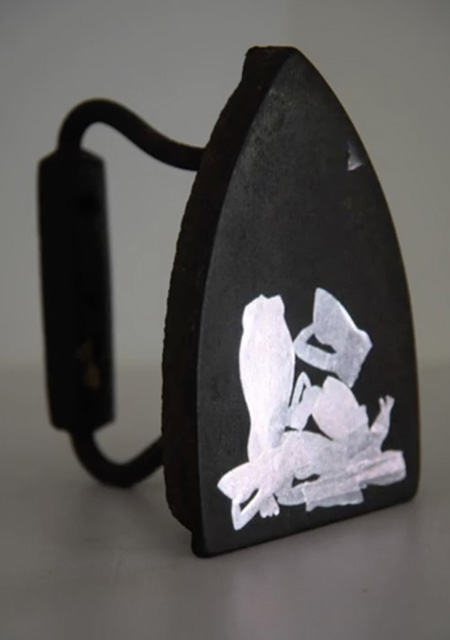 He transformed his “iconography of nostalgia” into “dreamlike objects” (pseudo-relics) that often incorporated found objects. Soviet history and culture — in particular Malevich’s Suprematist porcelain plates — and the heroic generation of modernist art were his stylistic touchstones.

In “Empire,” Orlovski continues his poetic synthesis of history, myth, and memory, now with digital projection video loops enlivening his sculptures and oil painting joining drawing, printmaking and collage. Four of these video-enhanced sculptures take an iconoclastic look at “creed[s] outworn” (to quote Wordsworth), ideologies that have outlived their usefulness. “Monument” projects stop-motion images of falling pieces of classical statuary, and plasters of Vesuvius’ victims at Pompeii, projected onto the hot plate of an antique iron — a direct tribute to Man Ray’s 1921 “Cadeau (Gift),” an iron converted into an instrument of torture with the addition of a row of tacks or nails. “White Flag” pairs a found fiberglass casting of a white windblown flag, replete with ornate flagpole bedecked with acanthus leaves and a video of a fluttering flag, nicely satirizing with its separation of art and life our occasional unquestioned allegiance … even to surrender.

The figure of the Running Man takes several forms in multiple works. Orlovski remembers the motif from a book illustration from his childhood. The flat black shapes — notably a triangular torso and a featureless spherical head beneath a round hat — become symbols of humanity in perpetual motion and transition. The largest iteration of the theme, “Running Man (Mobile),” is a mobile made of bronze segments suspended by polycarbonate thread, a puppet at the mercy of air currents.

The Running Man also appears in a digital-animation sculpture projected onto a plate, alluding to the Russian Revolutionary’s porcelain plates that disseminated utopian propaganda to the masses. A pair of collages situates the incessant figure on a trail, striding through rain puddles. A series of unique tintypes promulgates the image of a debased, corrupt capitalism that alludes to the recent rise of kakistocracies that will hopefully collapse before the environment does. At least the sentiment is there.

Six small oil paintings on linen and an array of drawings from Orlovski’s notebooks exemplify the artist’s penchant for a somber palette of black, white, gray, and beige. Four paintings or sculptures of heads are surrounded or garlanded by plants. The sculptures appear to be plaster busts in the style of Picasso, all misaligned eyes and multiple noses. Partially obscured by cubist foliage, they may be hiding, or just tending to their garden.

One of two paintings of hovering books has illustrations of these imagined sculptures. It might almost serve as an idealized depiction of the artist’s sketchbooks, from which 54 metamorphic drawings of mannequin heads, torsos, flags, feet, and books have been (to quote Rod Serling) submitted for your approval. Incidentally, a portion of the proceeds from sales of the Running Man tintypes will be donated to reproductive-rights organizations. Orlovski, with so many of us, clearly remains hopeful that the world will awaken from its collective fever dreams and dogmatic slumbers to demand a fresh generation of viable democratic leadership.