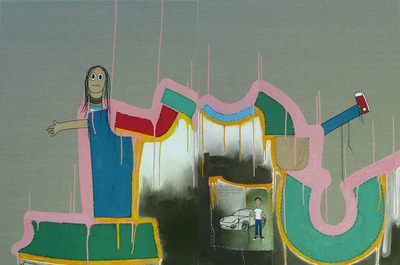 Carol Es' drawings and paintings have a childlike simplicity yet, while the articulation is pared down, the content is not. Titled "It's Mostly About Me and Much Less About You" this body of work draws from Es's personal experience, using characters from her family as well as her work in the apparel industry. The multimedia works include pencil, paint, embroidery and swatches of fabric woven together to create narratives in which the individual grapple with the struggles of life.

Es' characters have exaggerated features and not much detail, but their expressions and gestures are poignant commentaries on today's economic, social and political climate. Using vivid colors, Es comments on both fashion and the urban landscape, routinely collapsing fantasy and reality. Her new works solidify that through a developed idiosyncratic vocabulary of mark-making that allows even the simplest gestures to resonate.