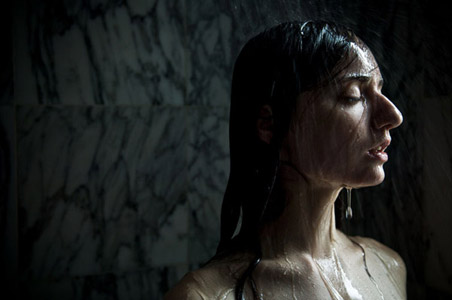 Are sexuality and sexiness mutually inclusive? As it turns out, they need not be, as Manjari Sharma's "Shower" photos make apparent. Whether due to an unspoken prohibition since "Psycho," or stock photography's overabundance, there's been a dearth of shower portraits in fine art, and Sharma's made impressive work of this underexplored niche. This group of nine individual portraits, of several women and one man, each taken in the same marble-walled shower, are dripping with, well ... water. But also vulnerability. The best of this set shows its subjects at peak wetness, from head to chest, sleek, moist and glistening.

Though this sounds like an equation for an ad of some bath product or other (or even, these days, who knows, car insurance) the difference here is not only that these individuals are completely devoid of smiles or salesmanship, they're also far too vulnerable in their dripping, closed-eyed wetness to be anything but themselves. They're neither expressing states of ecstasy nor slumps of relief, but rather stolen private moments which reveal some sense - something raw - of the individual inhabiting the pose. Alternately, there's the angle that this is what beautiful models do, and we needn't worry about their potential embarrassment for being photographed soaking wet, but Sharma manages to toss out that conceit. The lesser images of the group, which feel comparatively contrived, are still satisfying, perhaps in ways that make more commercial work commercial - that is to say widely accessible. Sharma would be best served, going forward, continuing to mine the most vulnerable qualities of her subjects, in a format that makes such extraction much more challenging.