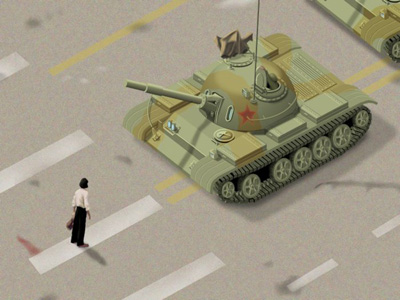 In "Isometric Screenshots" by Jon Haddock the artist appropriates 20 pivotal scenes from history and pop culture and turns them into video game-like images on digital prints. On one hand, the isometric perspective - an aerial, distant view - minimizes the emotional impact of Haddock's scenes, such as the shooting at Columbine or the confrontation between a protester and a tank in Tiananmen Square. On the other hand, the video game-like renderings force us to question exactly why we aren't more moved by these well-known images. The artist is in effect telling viewers to get out of their video-gaming escapism and confront society's very real problems. "Birmingham, Alabama, 1963," for instance, with its snapshot of National Guard troops hosing black civil rights activists, is an all-too-real evocation of our country's legacy of racism.

It's strong stuff from an artist who says he purposely mimicks the style of the popular video game "The Sims." His artworks, generated in Photoshop with 72 dpi computer-screen resolution, have traveled around the country for 10 years, and now return to Phoenix as part of a group exhibition with video game art by Jason Rohrer, Paolo Pedercini and Carlo Zonni. A concurrent exhibition is "Arma Branca," ceramic toy guns by Brazilian artist Laerte Ramos - all of which could be construed as wake-up calls.