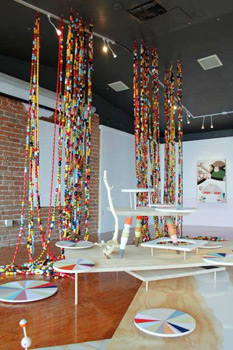 Melinda Bergman, 'Not a cloud in the sky' (detail) 2011, mixed media installation

It's initially an amusing exercise to walk gingerly around Melinda Bergman's multimedia installation and marvel at the interplay of materials and forms: the off-kilter stacked tables, colorful pinwheels made of plywood, floor-to-ceiling curtains of chunky macramé beads, even a mesquite branch. But the exhibition title, "Not a cloud in the sky: A meditation on the life ideal," is not an invitation to casual viewing; rather it's a command to look deeper into the forces of nature, history, science and psychology and perhaps see something foreboding.

Bergman takes on such serious narratives in several framed mixed media works on the surrounding walls. For instance, "Fear of the helping hand" (gouache and Japanese ink on paper), includes the bright pinwheels and molecule images that occur throughout her work; but the circus-like array is interrupted by a hand reaching into the scene from the right and a repeated image of a drowning man. And certainly in "Expanding time," another gouache and ink-on-paper scene, there's more to the story than balloons, paper cutouts, Tinkertoy constructions and thought bubbles with barely discernible writing. Inked in beneath the scene is something resembling a history mural with explorers and landscapes. Bergman's swirl of artistic media, forms and narratives may have a playful appearance, by they are meant to reach beyond that.