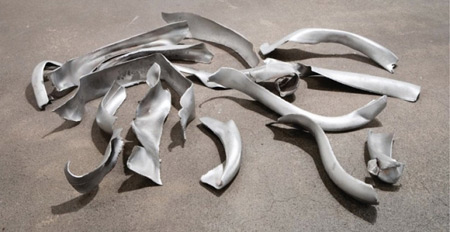 For example, an oblong hole has been blasted in the upper half of a minimalist rectangle formed by ten steel profiles mounted horizontally on the wall in "UPrising ACute DEscending - ABYsSMALL pleasuREs." The ragged hole suggests a bombed-out portrait painting, trailing tangled lines of detonation wire. His arrangements of straight beams of metal interrupted by violent jagged edges form rugged abstract expressionist installations, while other beams strewn over the floor suggest the aftermath of an IED. He uses the ragged lines in his architectural designs as well. The maquette for a house he designed looks as if one wall has been ripped away by a tornado. The chaotic visual fields of the explosions to add unexpected dimensions to his jaggedly unconventional architectural designs.