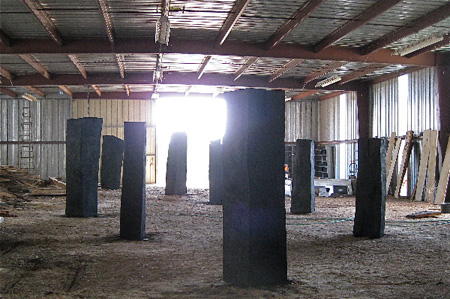 Munson Hunt’s monoliths of ten chain-sawed and charred cottonwoods, long dead before they were collected by the artist from a ranch north of Santa Fe, persist as testaments. After a summer of wildfires throughout the Southwest — New Mexico’s largest ever, the Las Conchas fire, cast a pall of smoke and anxiety over much of the state for weeks — Hunt surveyed the wreckage and found a perverse splendor in that which remained. Her six- to ten-foot upright rectangles stand as silent witnesses to defiant survival in a harsh world, with beauty itself the only constant. Strangely, like aliens on a burnt-out planet, white mushrooms have sprung out of the blackened wood forms, which arrived at Hunt’s studio still wet from several seasons of rain and snow. This organic and purely random addition to the work jars its purity of form, and turns what could have been just another intelligent exhibition by the artist into something poignantly awkward. Like real life.

A pair of glass slabs greet the installation’s visitors on either side of the entry. Made in collaboration with Bullseye Glass of Portland, the slabs reflect Hunt’s fascination with surface as substance. Their olive-green to ebony hues are compelling, and speak to the enduring simultaneity of life and death as an unfolding, infinite process.