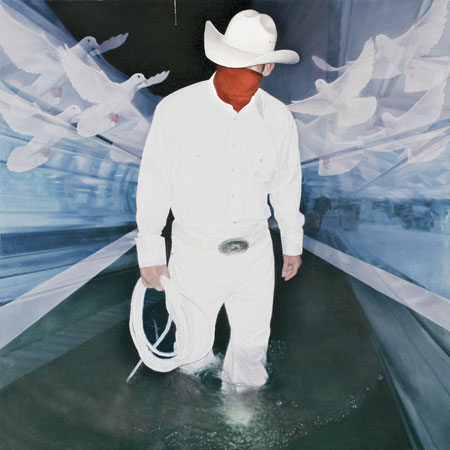 Seamus Conley’s recent show of hyper-real surrealist works—six oil-on-canvas paintings and six small drawings on paper, studies for the larger works—were captivating for their fine detail, otherworldly imagination, and intense imagery. Seen together, however, the works mark a transitional period for this young, quickly emerging, self-taught artist. Blips, which shows two figures dancing as well as their translucent past or future movements, and Bastard, featuring an upside-down car resting on solid ground and a dark, star-filled sky, take off in new directions; the remainder, the strongest of the works, show an evolution of previously presented ideas. Here, Conley further focuses on a lone figure, who decisively takes center stage. Lines of perspective emanating from a distant vanishing point propel the figure forward, toward the viewer. At times, humor plays a role, throwing the viewer off kilter slightly, adding a welcome twist. Conley’s palette remains limited: the works primarily feature a high contrast of bright white against dark blues and grays, with splashes of yellow or red.

The large Default (66" x 66"), an arresting image and obvious focal point of the show, pictures a cowboy figure in all white, with silver buckle, carrying a white lasso and masked with a red cloth. He walks in water through what appears to be a tunnel (the subway?) as doves, in various states of translucence, hover nearby. Heroic, hopeful, disastrous, the narrative wanders from absurd to grand; the imagery, verging on melodramatic, remains just short of it. Calgon features a woman in a white jumpsuit sitting in crossed-legged meditation, eyes closed, upon a simple desk wearing yellow dishwashing gloves and a tiara, blowing a large pink bubblegum bubble. Behind her, a range of snowcapped mountains; around her, rays of light. Exceptional in beauty and rendering, the  work lacks depth beyond its initial rapturous impact.

Conley knows how to wield a paintbrush and possesses a compelling imagination. The positive attention his work has received is well founded—having had his first show in 2003, he was a 2006/2007 SECA Award Nominee and 2007 Pollock-Krasner Foundation Grant winner. Moving toward greater refinement, these works do beg one to eagerly anticipate: with further resolution, what satisfyingly enigmatic places could Conley’s images take us to?