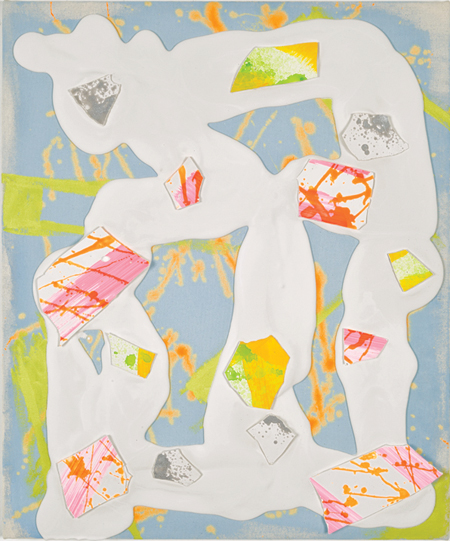 A sweet and amiable entry in what often passes for genteel gestural abstract painting today--let's call it abstract confectionism--Zachary Buchner's "Just Say Yes" took dead aim at delivering the acquiescent surrender its title cajoled. A Dufy for our time, Buchner seems able to turn out these paintings like breakfast popovers, each appearing so openhandedly and joyously saccharine that trying to distinguish between his works was like watching "Cupcake Wars" on the Food Network, the criteria for separating these smallish visual delicacies an exercise in such hyper-mannerism as to become tangential and absurd. But what's wrong with painting as cake icing anyway, what's the down side of making work so pretty and gooey that these were actually funny?

Buchner layers each of these works like a Napoleon (the pastry, not the Emperor). The bottom layer has some broad and seemingly random brushstrokes of bright and sunny pastel tones, all gallivanting about in a merry chase after nothing in particular. Several more layers of such stuff then meanderingly ensues, usually in mildly contrasting colors that gently riff off the lower ones as Buchner works upward. A globular layer of whitish plaster (!) then incompletely coats much of the lower layers, but allows enough of the giddiness embedded there to peek through, and then that plaster gets 'frosted' with more capricious strokes of pretty paint. (The plaster is a remnant from some of BuchnerÕs earlier interests, where in more gritty works he skirted the edge between painting and sculpture, using plaster as something like thick and obtrusive paint). But if Buchner used to go grunge he now goes glam, achieving a sort of consummate beauty and delicacy that is simultaneously so wan and hollow that there's a kind of guilt in moving through the exhibition, like eating your sixth or seventh petits fours. This is painting as juggling, four balls, five balls, six balls, a fine performance of a facile visual dexterity that never seeks to go anywhere in particular. It's easiest, of course, if you don't worry about all of this stuff and follow BuchnerÕs advice and just say yes, your willful cooperation an acknowledgment of abjuration and your honeyed complicity in these expert performances of pictorial entertainment.