'Installations Inside/Out'
at the Armory Center for the Arts, Pasadena, California
Review by Jeannie R. Lee 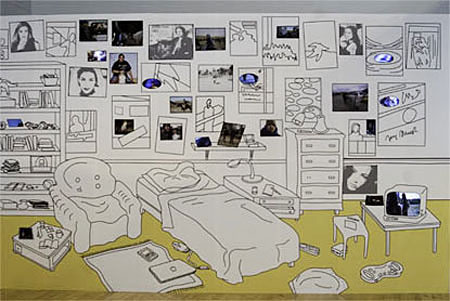 In a group show it is reassuring to be confronted with expertise and experience. It speaks volumes that a local community gallery such as the Armory can draw from a pool of established contemporary artists like Kim Abeles, Daniel Buren, Bruce Nauman, Ed Ruscha, Betty Saar and Pae White, to name only some of the twenty artist participants. All have previously created work for the Armory, and are here commissioned to make new site-specific works and installations to celebrate its 20th Anniversary year. Furthermore, while eight of the works are off-site installations and performances (from bike-powered chandeliers to skywriting), the central exhibit makes excellent use of the gallery space--including a narrow utility room where Saar creates a dream-like ambiance with a suspended filmy black dress, a canoe skeleton and an iron-wrought chair lit by blue neon. Many of the works occupy their own room, producing a surprisingly labyrinthine feel and a substantive overall presentation that moves away from the standard white cube.

Abeles and Ken Marchionno make canny use of their space, papering a room with digitally drawn wallpaper. All the elements of a bedroom are drawn in black outline on the walls--shelves, furniture, posters--but in place of the TV and computer screens we find picture frames;  in some of the drawn spaces within the wallpaper design, there are real video clips and photos of horses and Indians peering through. The contrast between the color images and the black lines catches the viewer’s eye, and the smaller scale (most of the images are index card-sized) makes them quite approachable. The voyeuristic desire to explore somebody else’s bedroom is activated as you move along the wall trying to make sense of the scenes of galloping herds and teepee building. The screen playing Disney’s “Pocahontas” offers a broad hint: the viewer is meant to question his or her own perceptions of Native Americans in today’s culture, and those inquiries arise naturally through the juxtaposition of the various clips and photographs.

Other works are equally deft. Twenty-first century reincarnations of art movements past and a variety of other works cast a long look back at the Conceptual Art of the late sixties and early seventies. Nauman’s untitled piece was originally proposed in 1969 and was actualized for the first time this year as the skywriting “LEAVE THE LAND ALONE.” For those who missed the noontime performance on September 12, the video documentation serves nearly as well to give one goose flesh. As Mel Bochner once described it, ideal conceptual art could be described and experienced via that description and infinitely repeated. That Nauman’s never before realized work could land so neatly on its feet thirty years later is testimony to Nauman’s prescience. Not only is this piece a classic, but Nauman manages to walk the walk as well, following the national park credo of living lightly: Take only pictures and leave only footprints.

Buren survives the passage of time just as nimbly. Recalling his striped posters in the streets and metros of his youth, several thousand small striped flags serve to form a colorful canopy at One Colorado Courtyard. The scavenger hunt nature of chasing down the art venues from the exhibition brochure, as well as the small sign at the entrance to the courtyard function to belie Buren’s anonymous signature. Yet the rainbow-hued fluttering flags still manage to appear in and out of place in front of the large Crate and Barrel sign, with which—in perfect conceptual form—they both battle and co-mingle.