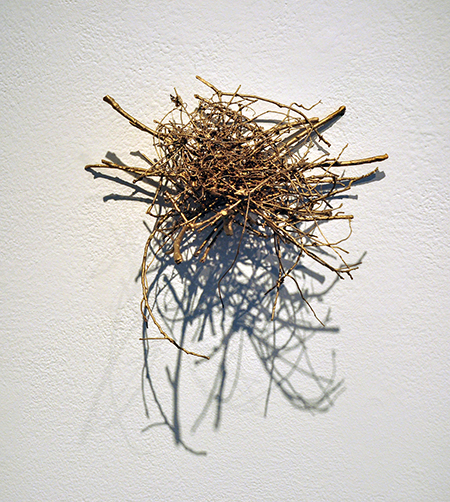 The focus of Lisa Ludwig’s attention can change dramatically from year to year. Her roughly biannual exhibitions, however, have been consistent for being memorable. Some were elaborate installations using objects covered with “frost” or “snow,” others contained a series of sculptures inspired by nature. This is Ludwig’s third show of birds’ nests, and although it is difficult to tell initially, these 13 nests are cast in bronze. The artist collects the delicate nests and then goes through what is obviously a laborious process — she describes it as “deconstruction” followed by “reconstruction” — before using a lost-wax process to cast them.

In Ludwig’s early shows, beginning in the mid-1990s, she worked with actual sugar and frosting to construct elaborate cakes and other sculptures. Later she began combining resin and silica to look like sugar, coating fruit and flowers with what appeared to be a heavy layer of frost. She has also exhibited white ceramic sculptures and installations of birds and animals, a medium that she handles expertly (her MFA was earned in ceramics).

The nests in this exhibition vary widely, as does the manner in which they are installed. They are scattered across the walls, the varying heights analogous to the way they would be positioned in nature. Some nests are composed only of a circular tangle of branches, while others include branches with leaves still intact. One in particular (they are all untitled) is a large piece with individual branches spreading out as much as four feet from the nest itself. Another includes tiny, delicate roses. All are lit by spots, which highlight their delicacy as well as creating intricate, mesmerizing shadows on the walls behind them.

Ludwig’s work has always been strongly feminine, and these sculptures are no exception. The nest is a metaphor for motherhood and nurturing, but it can also imply confinement and the responsibility for care-taking. In the past Ludwig has sculpted rabbits that suggested fertility and reproduction, frosted cherries and apples that allude to a loss of innocence, and cakes and flowers that reference the realm of women who dedicate themselves to baking, gardening, and creating a “nest” for the family.

Casting these fragile nests and branches in bronze makes them durable, resistant to time, which has both positive and negative aspects. The obvious advantage is that they are resilient and basically indestructible; the downside is that they have lost their aura of vulnerability. The bronze branches cannot be snapped, the twigs are no longer found fragments of nature woven into a purposeful repository.

Ludwig has never provided much in the way of commentary regarding her work, preferring to allow it to speak for itself, radiating back to viewers that which they project onto it. For some, her work may be romantic and serene, while to others it may provoke discomfort to be in the presence of so many references to mating, fruitfulness, and domesticity. Regardless of the associated emotions, the sheer loveliness of these elegant fabrications that pay homage to the splendor of the natural environment is undeniable.