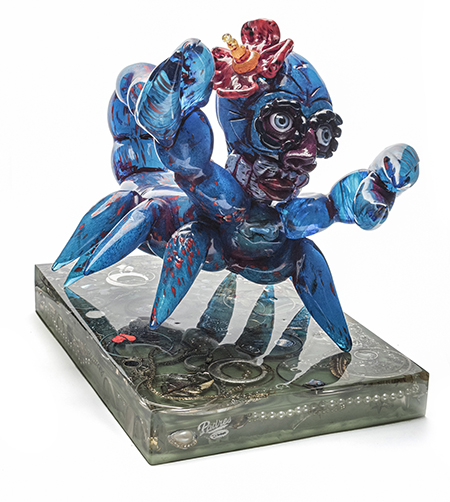 Einar and Jamex de la Torre's exhibit, “Borders and Other Imaginary Fractals,” includes large and small lenticular-print assemblages, discrete glass sculptures, and medium-size works that have glass affixed to their surfaces. Well known to L.A. audiences, the presence of this duo in the Pacific Northwest is connected to various residencies at Pilchuck Glass School, where they developed collaborations on found-object assemblages, adding to the tradition at Pilchuck begun by the late Italo Scanga. In Pioneer Square, their particular blend of high-art and kitsch looks good, almost distinguished and authoritative despite garish colors, crowded compositions and over-the-top scenes bordering on the orgiastic and vulgar. Why? Because in the process of creating their outrageous tableaux and vignettes, they summon up ghosts of European art history to add substance, resonance and a solid cultural backbone to these otherwise tacky works.

Hieronymus Bosch was collected heavily by the Spanish throne and is widely credited with emphasizing the morbid and frightening in Spanish art. The pair include references to Bosch in their LED light box, “The Flaunting of Youth,” the largest work on view here. A tour de force (like much of their work), “Youth” has everything but the kitchen sink, along with oeil-de-boeuf oculus windows, adolescent girls cavorting in an indoor pool, trucks, wild animals and all sorts of inside jokes about Spanish Colonial influence in the Americas. This is the strong paradox and fruitful contradiction in their work: it starts out as off-putting with its bright lights and cheesy tactility, and then pulls us in like a rough but attractive suitor.

“Look at me, Leonard” may be a reference to da Vinci, but also summons up a panoply of architectural and archaeological references, such as the interior of Córdoba Mosque-Cathedral, spiral staircases and skulls. With the woozy lenticular lenses on so many of the pieces, perception is controlled and qualified, part of the price of entry. The rewards are considerable, though: gleaming glimpses into a foreshortened spatial world that does not really exist but seems to be occurring as we watch.

Less stark and more straightforward, “Transdifferentiation” is a see-through human head or skull, manageable at five by four feet, that throbs due to the lenticular trickery, as if we are watching the gray matter in the brain pulsate. Cassette tapes, silver stripes, and entangling vines up the ante with imagery of confinement and scary mind control. More elegant, “Corazon Corriendo” (2017) mixes anatomical heart, spine and liver beside a perched parrot. Glass elements are applied to the exterior of the LED box in another climax of overkill.

Fresh from their acclaimed show earlier this year, “Seven Deadly Sins,” at the Glass Museum in Ebeltoft, Denmark (the Louvre of contemporary European glass), the brothers include one of the smaller works done for that show, “Why Me?” A nude male figure has his crotch replaced by a leering face and obtruding tongue. Elsewhere, “Rabbit Hole” repeats a common mandala shape they have used before, but this time with a mask face and cross-cut lotus roots. As in Mexico, differing religious practices coincide and overlap frequently, but now on a global basis. “Deer God” is a strong full-length figure at four feet high. Wearing a bandolier of bullets, the brown-skinned male nude is defiant, sprouting antlers and a roe buck’s head. Echoing pagan practices related to hunting and gathering, this work’s origins are ancient, but updated in shiny glass. Similarly “SeaTac,” a giant cockroach with slimy green legs and big clear buggy eyes, reminds us that cockroaches transcend time and apartment building fires. “She’s a Scorpio” is the best of the other glass sculptures. Wearing cheap costume jewelry, the female scorpion is a brilliant blue hue set over a clear base with embedded women’s adornment. With a few of her six legs raised, she dances as if listening to music.

More in the Pilchuck vein are colored blown bottles that are decorated with splintered glass add-ons or “jimmies.” “Tongue in Cheek” and “Melancholia” address alcohol addiction perhaps, but amusingly and beautifully with frowning faces and comical attributes. “Melancholia’s” dripping white facial features are crying, as if in an alcoholic depression, set over a bright orange bottle.