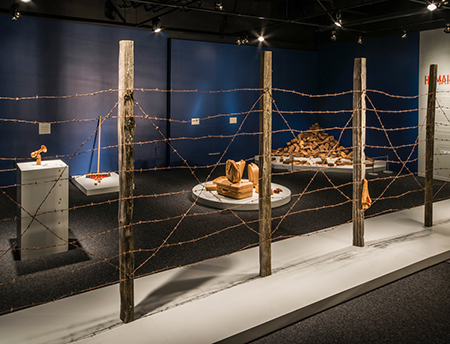 When I viewed “The World is NOT perfect” (2014-17), one of Humaira Abid’s installations in her exhibit “Searching for Home,” I was reminded of the sight of piled-up, left-behind shoes and suitcases I had seen a few years ago inside the Auschwitz Museum. Stacked up into a corner, Abid’s pile is also of shoes and suitcases, along with dolls, sandals, baby pacifiers and bricks. However, everything is carved out of wood, mostly pine and tulip, with some mahogany. The revelation that such detritus is actually the product of loving hand-carving goes a long way to redeeming our recognition of the scene’s origins: bombed-out buildings in some forlorn, war-torn part of the world like Afghanistan, Somalia, Zambia, Syria or Pakistan. It is one of seven specially commissioned installations for her solo museum debut. In an important revivifying act for the crafts, she proves that humble materials and basic processes can be vehicles for subjects and meaning of the highest, most serious order.

This internationally hailed artist lives and works in Renton, a high-tech bedroom community south of Seattle. From there, she has navigated another studio in her native Lahore along with arranging solo gallery shows and being invited to be in significant group shows in a raft of exotic places including Mauritius, Dubai, Nepal, Malaysia and Kenya. In Lahore, she works closely with a furniture maker and wood carver who assist in her intricately carved trompe l’oeil facsimiles, each acting as conceptual trigger to sculptural groupings that address exile, ethnic cleansing, the role of women in Hindu and Moslem societies, as well as the tragic fate of children caught up in coercive migrations across the globe. While her exhibition record in the U.S. is growing, her defiant confrontation of unpopular issues in developing countries has brought her death threats, warnings, as well as a string of rave reviews and invitations to exhibit internationally.

“The World is Beautiful, and Dangerous, Too” (2017) suspends a wooden-link swing above a pair of blood-spattered, wooden Mary Jane shoes. This is a reference to the 132 schoolchildren slaughtered in Peshawar in 2014, with a single picture of Khaula Bibi on the swing seat, the only girl pupil killed. Tight, topical allusions are always present, but do not overwhelm Abid’s powerful image-making and formal assembling skills. More schoolgirls and refugee children are honored in “Fragments of Home Left Behind,” a suite of five mock-Mughal miniature portraits of girls in refugee camps. “Borders and Boundaries” (2017) is an expanse of “barbed wire” executed in carved mahogany and cedar. Stuck to the center is a bloodied pair of white panties. As the viewer circumambulates the room, one crisis remnant or atrocity leads to another. Interspersed among everything are giant ants of painted epoxy that are pinned to sculpture stands, walls and floor areas, invading where they choose.

Ending on a maternal note, while reminding us that children are born even when parents are in captivity or detention, “The Stains Are Forever” (2016) and “Breast Pump” (2017) incorporate images of birth, breastfeeding and nurturing into tableaux of horrific disruption and abandonment under duress. In the former, more ants are devouring the blood from dozens of discarded, bloody infant pacifiers, all about to be swept up by the large broom of the totalitarian state. In the latter work, mother’s milk in a breast pump is what curator Jennifer-Navva Milliken calls “a portable representation of home and its meaning.” Rendered in non-fuctional pine, the pump becomes a ritual object, desired yet dreaded, packed at the last minute, discarded along the way to danger or oblivion — or the sustenance of life. Human costs are the underlying currency of Abid’s aesthetic economy; her force as an artist lies in her determined objectification of such events and aftermaths. Charged with a legacy of conceptual art and its impact on sculpture, Abid is reinvigorating the role of the artistic maker as architect and prophet of human destiny.