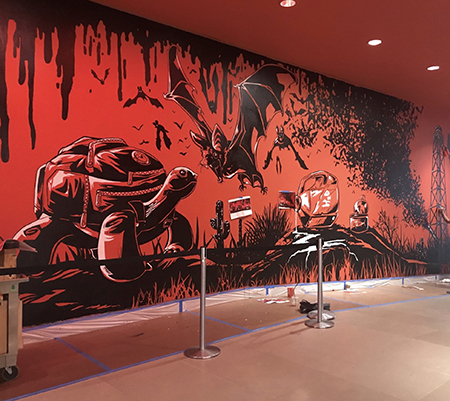 The ubiquity of billboards and massive video screens competes for our attention and certainly attests to the compelling visual power of the format. That should never diminish the importance of contemporary mural painting. Minerva Cuevas (b. 1975, Mexico City) has executed an immersive mural that takes up the entire wall traversing the main concourse at the Dallas Museum of Art. Known as a multimedia artist, Cuevas creates conceptual appropriation art that targets corporate branding and advertising in order to turn the tables on their strategies. Having exhibited extensively internationally, this site-specific piece represents her first solo exhibition in the United States.

“Fine Lands” draws from the graphics of comic books, satirical newspaper cartoons and animation to mount a sweeping visual narrative that takes place along the Texas plains. Painted from floor to ceiling, it’s over 160 feet long and utterly impossible to view in a single glance. Cuevas is interested in how recognizable images can tell a story in a way that leads to universal understanding regardless of the viewer’s background, social class or the language they speak. Along those lines, the mural is limited to three basic colors: red for volume and background, white for highlights, and black for texture and framing.

Themed via a storyline of migration into and through Texas, protagonists in the form of indigenous creatures such as prairie dogs, ants, an armadillo and a turtle are stand-ins for human communities. They are all armored in some way for protection, and make their way through a desolate and dangerous landscape punctuated by rifle crosshairs. They are all under surveillance by some unknown force suggestive of a militarized population that hunts migrants. Read from left to right, the mood presents dire straits from the start and becomes increasingly ominous as it proceeds toward the other end.

At the entrance to the mural the words painted above the concourse on the ceiling read “Land Liberty Life” in block lettering. This reference to the Mexican Revolution (1910-1920) and the agrarian movement adds the ideological zeal of Ricardo Flores Magón, a pivotal figure whose writings influenced politics leading up to the Mexican Revolution. The figures in the mural are in pursuit of these most basic needs, as they are assailed from the beginning by horrific bats and an oozing black liquid that seeps down from the sky. As the imagery progresses it becomes evident that the bats and the liquid are related, ultimately leading to the revelation that two oil derrick towers are spewing forth swarms of the menacing creatures. They express Cuevas’ critique of the pestilence, greed, and general disregard for life that she associates with the oil industry.

The final section envisions the moving parts of an oil derrick as several claws belonging to a giant spider-mantis that makes its way toward the migrants. This formidable creature suggests utter doom for the world both inside and outside the mural unless critical awareness gives way to social change. This panoramic vision cast in front of a red sky leaves little doubt about the desperation of the migrants as they come across water bottles and canned fish presumably set out by friendly forces. One ant proudly raises a corn seed into the air and another carries a computer circuit board; the former represents the basic need for food, in the latter resides hope for a better future though technology. Cuevas’ fantastical world strikes hard at the ills that assail contemporary society through her skills in visualizing a narrative with satire, wit and irony, with some humor mixed in as well.