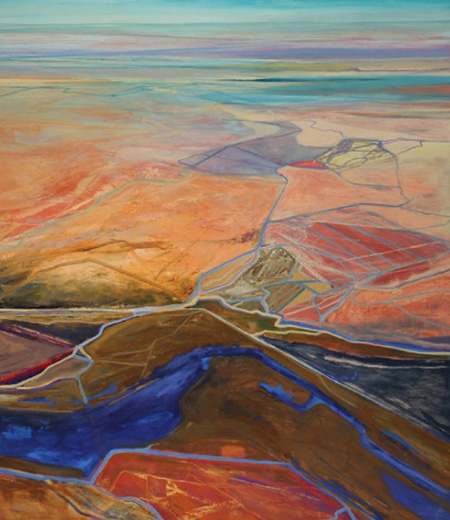 For as long as humanity has imagined an end to the world we’ve also been depicting it. In the Anthropocene we may perhaps be engineering it. And then there are art exhibitions like “Altered States,” which reflect upon the morbid beauty of humanity’s global effort to fulfill doomsday prophecies. In the Anthropocene hypothesis, humanity is itself a geological agent of a biological nature, and this epoch (after the more naturally predictable Holocene) has brought heretofore unseen changes, even enduring substances that wouldn’t otherwise exist, for example Styrofoam and enriched Uranium. Indeed, one might pessimistically presume that Styrofoam will be around much longer than we.

Two sculptures by Jodi Rockwell are presented front and center on plinths, surrounded in turn by a dozen paintings and mixed media collages by Phillip Govedare, Laurie Hogin and Josh Dorman. Rockwell’s vessels, “Calm Water” and “Cenote,” resemble weathered canyons or flesh squished around boulders, with shallow pools of blue-green resin inside. The sculptures lie in that uncanny valley between landscape and the body, which can have animistic undertones or feel more squeamish. They would feel more “earth mother” in a different show but feel disquieting in the context of “Altered States.”

This might also be said of Govedare’s barren, aerial-view landscapes. Some appear as irrigated desert, while others look riven and stripped of life. In “Artifact” fiery rivers and lakes read as industrial wastelands, or perhaps lava fields from earth’s first molten eons. Govedare and Rockwell’s works remind us that we are forever earthlings, despite our singular ability to transform it and our parallel desire to transcend it, whether by eschatology or rocketry.

The unease that comes from viewing such ambiguity is therefore not just “climate despair,” that existential dread and fatalism that has many millennials unbothered by questions of retirement because they expect to die in water wars. It’s perhaps a deeper sense that all doomsday prophecies are inherently self-fulfilling if, at base, we want so dearly to separate from the earth, to see ourselves out once the party is over. For those expecting an eternal after-party, apocalypse is just a change of venue.

Meanwhile, survivalists stockpile food and venture capitalists ponder how to maintain loyal security forces at their lux bunkers when society collapses. Critics of climate activists call them “catastrophizing” — a telling escalation of rhetoric. If denial of climate change has become harder to sell, the industry-approved message is “It’s not that bad.” Hell, ecological genocide might even present new business opportunities. The unease one feels in “Altered States” is not from a new shock. To the contrary, it’s the knowledge that we’ve seen countless critiques of human hubris and been unmoved. It’s the reminder that our self-inflicted ecological crisis is recent history, but our folly is prehistoric.

In “Altered States” the more active visions of folly are found in Hogin’s paintings and Dorman’s multimedia collages. Hogin rightly deems two paintings of sneering rabbits, liquor and poison cake as vanitas. But rather than a general memento mori, they say, “Remember, you will self-destruct.” Meanwhile, the brightly colored menagerie in “Habitat Diorama with Pyromaniac Species” is a lurid, restive mutation of Edward Hicks’ “Peaceable Kingdom.” The confusion of forms in Dorman’s collages look playful or even placid at a distance. But closer up one finds disaster after disaster, either in progress or on the cusp of it. They are a “Garden of Earthly Delights” for Trader Joe’s shoppers, “Dies Irae” in Brooklyn or Soho. Even in a godless universe there can be a judgment day.

The twentieth century was already rife with exuberant doomsday fantasies: Gyorgy Ligeti’s musical embrace of universal heat death at midnight in “Le Grand Macabre”; the atomic apocalypse of Stanley Kubrick’s “Dr. Strangelove”; the post-apocalyptic medievalism of Walter M. Miller’s “A Canticle for Leibowitz”; and of course the entire disaster genre. One is inclined to moan, “Oh, not the apocalypse again …” But one can’t dismiss works like Hogin’s and Dorman’s for lack of novelty without committing to the pathological need for novelty that lies at the heart of so much industrial waste … or to the ancient folly postulating that the world is not enough, so we must remake it in our own vision.

Alas, whereas visions of the Day of Wrath might have been enough to scare the Jesus into European peasants, it would indeed be a miracle if the vision emanating from “Altered States” compelled us to adjust course. Still, it offers a little catharsis, perhaps even inspiration to join in the larger cause. I hear Jane Fonda is planning on getting arrested at the Capitol every Fire Drill Friday for a while. She started last week.