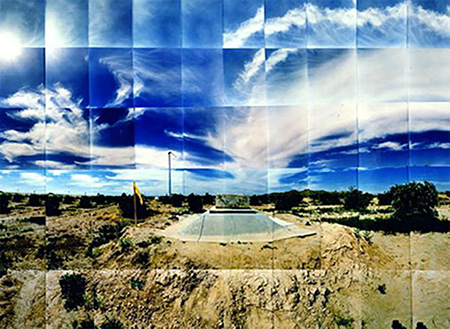 Although Donald Trump’s Executive Orders on immigration could be considered serious assaults on human rights, it is important to remember that he was not the first U.S. President to establish racist concentration camps for people of color. Flashback to 1942 and there was Franklin Delano Roosevelt’s Executive Order 9066, which established ten detention centers around the United States for the incarceration of Japanese-Americans. With hopes that we never forget this great American tragedy, three contemporary artists of Japanese descent have created significant works on the subject.

Masumi Hayashi (1945-2006) was born in the Gila River Relocation Camp in Rivers, Arizona and grew up in Watts. Since she was just an infant during her family’s period of incarceration, Hayashi had no personal recollection of the experience when, in the early 1990s, she set out to learn as much as she could about the camps through research, interviews with survivors and photographic documentation. For almost a decade, she photographed all ten relocation centers using her personal methodology for creating panoramic photo collages. While similar to David Hockney’s approach of building a composition from numerous small photos, Hayashi’s modus operandi was far more calculating and methodical.

Considering her process to be a form of mapping landscape, she positioned her tripod in a single spot and rotated the camera incrementally so as to cover every bit of land, from left to right, top to bottom. As formulaic as this may seem, the resultant images are beautifully haunting. In one example, fragmented shadows of her tripod and camera appear in the foreground, symbolically placing the artist herself at the entrance to a barren landscape flanked by stone guard gates that still stand. In another, a cemetery is surrounded by lush tree foliage, a metaphoric contrast between death and life. Similarly, in a photo collage of her birthplace, billowing clouds emanate from a dog’s grave like a rising Phoenix, suggesting resilience and rebirth in the aftermath of devastation. Although Hayashi was tragically shot to death by a neighbor, her photos of the camp sites are preserved on The Masumi Hayashi Museum website, along with extensive documentation and taped interviews. (http://www.masumimuseum.com/index.php/internment)

Although best known for his political pop orange crate label paintings, Ben Sakoguchi spent 1999-2001 working on “Postcards from Camp,” a series of eighty small paintings that use the compositional format of postcards. Born in San Bernardino, Sakoguchi was five years old when he and his family entered the Poston Relocation Camp in Yuma County, Arizona. In the years that followed their return home, his parents rarely spoke about their time there, until his mother finally opened up when she was dying from cancer. “Postcards from Camp” was motivated by the death of both parents in the 1990s.

Like Hayashi, Sakoguchi conducted extensive research by interviewing former detainees and studying family and public photos and other available documentation. Using imagery based on photos along with his added text, Sakoguchi’s “Postcards from Camp” tells the story of the Nisei experience before, during, and immediately after incarceration. One of the early works depicts his mother standing by her car, with text explaining that she was American born but schooled in Japan, which meant she was a Kibei, considered by the U.S. government to be “the most treacherous and disloyal of Japanese-Americans.”

Another work is based on a group photo of the Supreme Court, which justified the camps on the grounds that “military necessity overrides the constitutional guarantees of the Bill of Rights.” From the many portraits of survivors accompanied by text that reveals what happened to them, we learn about a Nisei man who was sent to the penitentiary for counseling others to resist the draft. A young Latino teenager went to the camps to be with his friends, only to be found out when he was drafted. Presented in a direct and straightforward manner, “Postcards from Camp” remains the kind of historical documentation that should be viewed and reflected on by all Americans. The complete series may be viewed on the artist’s website. (http://www.bensakoguchi.com/series_postcards_from_camp.php)

In a recent series of life size ink portraits of personal friends and family who have incurred societal oppression, Bryan Ida pays homage to his grandfather, who appeared in an archival photo by Dorothea Lange. In it he is waiting to board the bus to the Topaz Relocation Camp in Utah. The drawing is from Ida’s series “con.Text,” (https://bryanida.com/con-text-ink-portraits-on-panel/) where the images are all constructed from the artist’s written inscriptions of texts that relate to the subject’s situation.

A portrait of a Muslim woman is composed from hateful tweets from Donald Trump, while the son of a Holocaust survivor is created from the text of the Nazis’ Nuremberg Race Laws. In Ida’s “Grandfather,” the man and his luggage are made up of the text from FDR’s Executive Order 9066. Because the artist’s grandparents were immigrants, the image is also a timely and cautionary reminder that, with the Trump administration’s horrific treatment of migrants from south of the border, it still happens here.