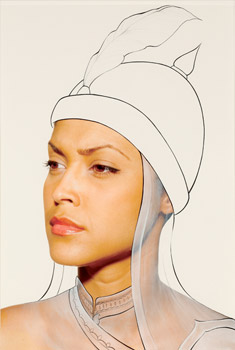 Many artists draw upon their individual histories to create works which speak to their experience. For artists of Persian descent, in particular, the personal is also political. Exploring multi-cultural themes, Bay Area-based Ala Ebtekar recently presented a show of mixed-media works at San Francisco's Gallery Paule Anglim. Raised in Berkeley of Iranian-American heritage, Ebtekar draws on the tradition of Persian miniature painting, as well as its contemporary Iranian cousin, qahveh khanehei-- coffee-house painting.

Washy images of angels or warriors inhabit conceptual environments layered on fields of antique prayer book pages, layered in turn on canvas, while arresting mixed-media works in acrylic and ink on digital prints reveal beautiful solitary women in battle helmets, or perhaps sprouting wings. The Pariya figures are strong, defiant, and a bit sultry. Ebtekar is clearly challenging the traditional Arabic attitude towards women--that they need to be veiled and submissive. Pariya #15 confronts us head-on, with a steady, challenging gaze. Her helmet bears, along with a pair of horns, a gauzy veil and a jeweled plume, the eyes, ears and ringed nose of some kind of demonic animal. We may learn that the Shahnameh, a mythic poem based on Persian history, revolves around a hero, Rostam, who fashions a helmet from the head of a demon he slays.

Ebtekar, who obtained his undergrad degree from SFAI and his MFA from Stanford, also has roots in graffiti art and his style conveys some of the brash, graphic impact of street art. Enrique Chagoya, the Mexican-born artist whose satirical works expose racism and injustice in our society, taught Ebtekar at Stanford and his work has certainly influenced the younger artist. We may recall as well the compelling video works of Shirin Neshat, a Cal alum, which explore gender and identity in contemporary Arab society. The artist has made numerous trips back to Iran; like many artists who are rooted in more than one culture, there is a sense of displacement, of being neither Iranian, nor, completely in some sense American. Ebtekar has taken his unique experience of growing up in a liberal, multicultural urban environment and melded it with classic and structured elements of Persian history, myth and style. His response to these influences creates artwork that is arresting, somewhat disturbing and a bit hermetic--but with a seductive, contemporary edge which invites us to get closer.