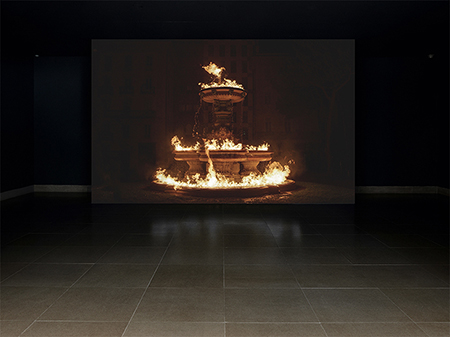 Five bodies of work comprise “Towards No Earthly Pole” the first U.S. museum exhibition dedicated to the Swiss conceptual artist Julian Charriere. Based in Berlin, the artist works with photography, sculpture and video to flesh out his interest in climatology, 19th century Romanticism, and land art. His work often displays a fascination with spectacle and light metaphysics that is aesthetically related to the Berlin University of the Arts’ Institute of Spatial Experiments and its founding director Olafur Eliasson. Born in 1987, Charriere is still rather early on in a career that already boasts a long list of accomplishments on an international scale.

With a flair for the dramatic, Charriere’s art embraces and visualizes Romanticism’s notion of the sublime, through which he investigates the Anthropocene, or our particular geological age. He creatively grapples with modern intervention into the environment through exploration and industry, these being the primary factors that threaten to destroy the beauty of nature and ultimately life on a global scale. Two large scale video installations act as bookends for the exhibition, arguably it’s most compelling pieces, which frame a large gallery in between where the three remaining bodies of work are displayed.

At the entrance, “And Beneath It All Flows Liquid Fire” (2019) fills several square meters of space, nearly floor to ceiling, to animate a darkened gallery. It’s nighttime and we see a fountain in a Lugano, Switzerland square that’s engulfed in flames as water simultaneously pours forth along its structure. It serves as a meditation on opposites like light and shadow, or fire and water, that suggest the power to create and purify, as well as to destroy. On a continuous loop, the projection includes the bellowing sounds of the elements at play that, taken together in a writhing rhythm, both fascinate and mesmerize. This juxtaposition of wild elements and what the viewer normally experiences as a quiet city square suggests more than a hint of danger as one ponders what’s at stake when we misuse technology.

The exhibition’s remaining pieces hone in on the Arctic, and humanity’s long-standing interest in exploring and perhaps taming the poles and their glaciers. Charriere cites the ill-fated Franklin expedition, whose crew perished there, and a poem by Alfred, Lord Tennyson that provides the title of the exhibition. What also comes to mind is the moment of Marry Shelley’s “Frankenstein” when the protagonist pursues his creature into the ice and meets his doom. The series of photographs titled “The Blue Fossil Entropic Stories I-III” (2013) directly relates to Caspar David Friedrich’s painting, “The Wanderer Above the Sea of Fog,” in which from the back we see a lone figure poised at a peak, with a view of the wild bright white mists below. This figure is a type of conqueror of nature itself. As an antidote, Charriere pictures himself atop a glacier with a blowtorch, trying in vain to melt the ice. In each of the three photographs the futility and pathos of such an act directly lampoons human folly and the ultimately destructive practice of extracting fuel for profit.

In a gallery lit solely by moving video images, projected onto a wall twice the size of the introductory film, resides Charriere’s capstone piece, “Towards No Earthly Pole” (2019). This ambitious, awe inspiring, 4K film with color and sound runs 104 minutes. It depicts glacial formations in a collage of footage captured in Greenland, Iceland, and the Alps with the use of drones mounted with both cameras and sources of light, being that this was filmed during the dead of night. Here is where the sublime comes into play. Philosophers in the 18th- and 19th-centuries hotly debated the nature of the sublime; it was Arthur Schopenhauer whose contribution held sway for artists at the time. He privileged the sublime over the notion of beauty, such that the vastness of nature or overwhelming architectural spaces once experienced have, due to our inability to perceive their entirety at once, a way of eliminating the viewer’s individuality, which is thus absorbed into a consideration of the immensity of the universe.

In “Towards No Earthly Pole” the camera glides and sways in between icebergs, investigating corners and some spaces that look like caves. In one sequence a waterfall appears, which along with thundering sounds produces a spectacle that makes it impossible for the viewer to become oriented to a particular point of view. This results in a submission to the idea that the powerful forces of nature are beyond our full comprehension. The film reveals the power and majesty of the glacial realm, and by extension of the whole of nature.