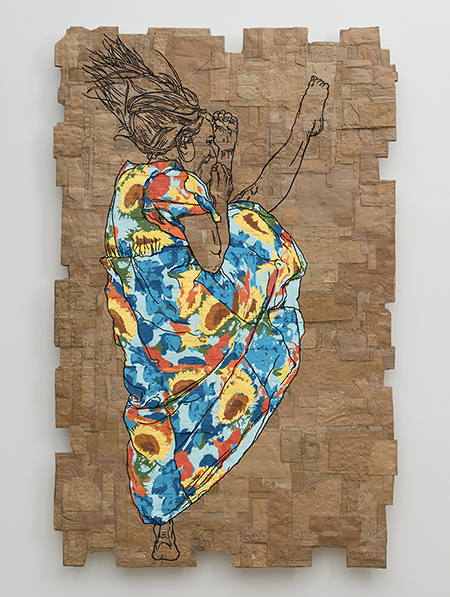 As a self-proclaimed feminist and social activist who creatively fuses her politics with her artworks, Andrea Bowers is an artist with convictions. She seamlessly integrates thoughtful interpretations of current and historic events with beautifully crafted drawings, collages, installations and videos. The subjects of her projects range from international relations to women's and worker's rights and global injustice, as well as climate change. Whether a single drawing or a full-on installation, Bowers is able to communicate her commitment to social causes with sophistication and grace.

For “Energy with Intention,” six large-scale mixed media works are dispersed across the spacious gallery. Six smaller drawings (studies for these pieces) appear together in a line on one wall. In the back gallery, there is a video from 2002 (remastered in 2021), “Avenging the Ghosts of My Younger Self (Situated Between Minimalist Art and Arcade Games),” in which Bowers is filmed performing martial arts movements and self-defense kicks in front of fluorescent light sculptures by Dan Flavin. Wearing street clothes that take on the hues of the lights, Bowers kicks and punches into the air throughout the 2:53 loop, never really interacting with Flavin's work. It’s a humorous jab at the male dominated art world, specifically the Minimalist canon.

An ongoing theme is the linkage between civil disobedience and dance. Many of the gestures in the video have the feel of a beautifully choreographed dance. A series of "Self-Defense Drawings" here also focus on the relationships between aggression and dance. To make them Bowers photographed women from Los Angeles who are practitioners of different forms of martial arts and self-defense. She asked them to wear street clothes and dresses, not the traditional martial arts uniforms. She then transformed the photographs into graphite drawings, which were then enlarged and painted with acrylic and pigment ink onto surfaces composited together from hundreds of pieces of found cardboard. Bowers has been using discarded cardboard as the ground for her work since attending the Occupy Wall Street protests, where she fell in love with the myriad iterations of cardboard placards: "I think about these collaged cardboard works as monumental protest signs. The grounds are made entirely of recycled materials while simultaneously providing interesting content with the cardboard browns and tans. I wanted to show the beauty of the collaged cardboard, so I kept these drawings minimal in their use of color and line."

In “Fighting Women, Maritza, Side Punch from an Arrow Stance,” we are confronted by the magenta haired Maritza. She wears a cyan dress and appears ready to throw a punch. Outlined in black, her body forms a triangle within the tan-colored collaged background — head at the top, feet spread wide, dress draped in between. The corrugated pattern within the cardboard becomes the texture of her skin. Bowers presents her as a powerful, dominant and threatening force. “Fighting Women, Ivy, Jump Axe Kick” depicts Ivy from the side in a long blue dress covered with a pattern of yellow sunflowers. While the subject's facial expression and body language depicts the aggression of the action, her clothing is, as with the others in this series, the uncharacteristic contrasting variable. Like “Maritza,” she fills the entire cardboard ground. Her arms are positioned to protect her face as one foot is extended high above her head. “Fighting Women, Sunny, Jab” is monochromatic. Sunny's short slip-like dress hangs just above her muscular thighs. A steady and descriptive black line defines her form, with just enough detail to imply both the movement of her hand about to jab, as well as the determined expression on her face.

Each of the six portraits is the result of a collaboration between Bowers and her subjects. She chose to photograph live models rather than to work from archival or media images so as to have more control over the results. Comparing the original drawings to the enlarged paintings (the photographs are not available), the drawings are softer, the women more vulnerable than in the more empowered paintings. In the final works, larger than life-sized strong, self-assured and determined women assert their femininity wearing the gendered outfits.

A decade after “Avenging the Ghosts of My Younger Self (Situated Between Minimalist Art and Arcade Games)” Bower’s women have only gotten more adept at protecting themselves from anything unwelcome that crosses their path.